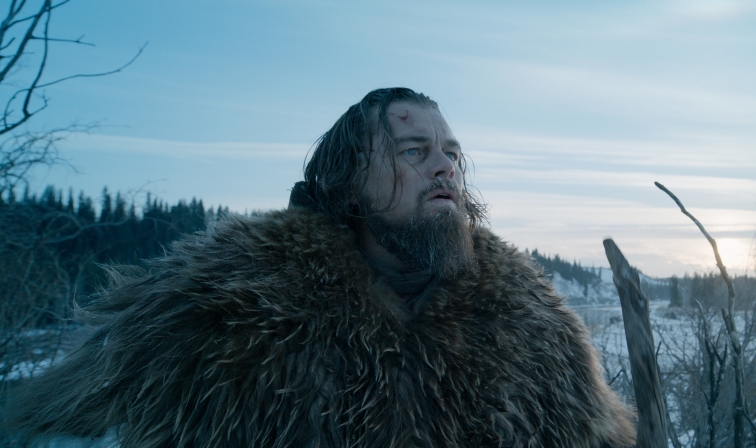 Based on the novel by Michael Punke which is itself based on true events, Alejandro G. Iñárritu’s Oscar-winning The Revenant – out now on DVD and Blu-ray – is the tale of a frontiersman named Hugh Glass (Leonardo DiCaprio) and his relentless quest for vengeance after his comrades left him for dead in the wilderness of the Louisiana Purchase following his brutal mauling by a bear. As flawed as the source novel, though in different ways, this is a piece of visual and aural ingenuity that impresses more than it moves, feeling as icy and empty as the snow-laden landscape.

This is a feature of both the original story and Punke’s novelisation, but is more problematic for Iñárritu whose screenplay (co-written with Mark Smith) struggles for meaning and spirituality amid a story with an intrinsically cold heart. Where Glass was originally just abandoned by his two colleagues Fitzgerald (Tom Hardy) and Bridger (Will Poulter), this version throws in a half native-American son, Hawk (Forrest Goodluck), who is murdered by Fitzgerald while the incapacitated Glass watches on, unable to intervene. His desire for revenge is now interwoven with a hamfisted tale of familial loss, represented by dreamlike flashbacks that land somewhere between Malick and Gladiator, but have the effect of neither. The relationship with his son lacks the tenderness during life to tug heartstrings in death. While DiCaprio may be discussed for impending Oscar glory, it’s Hardy whose unsettling gaze stands out while Leo struggles with a cypher of a character who is difficult to care about in more than the most simplistic of ways.

Punke’s novel refused to offer a climactic catharsis, but that left a hollowness in the pit of the stomach; Iñárritu’s film both proffers catharsis and denies it, but leaves a feeling of nothing but numbness from the cold. The conditions that Glass travels through have something to do with that, a harsh untamed world that dwarfs the perils of men and through which the production – which filmed in the US, Canada and Argentina – is famed for its difficulty and threat of hypothermia. It makes for a horrible authentic experience which Emmanuel Lubezki (now Malick’s cinematographer of choice) shoots almost entirely in unforgiving and immediate close-up. It’s a bold style – as was the floating single-take of Birdman – and is at its most incredible during the two most intense sequences; the terrifying bear attack and an opening battle between the white fur traders and a raiding party from the Arikara tribe.

It’s a staggering pitched battle that can’t help but call to mind the brilliant work at the beginning of Steven Spielberg’s Saving Private Ryan for its innovation in portraying combat. Incredible tension is punctuated by the swoosh of arrows and blood spurting from necks, before the chaos of battle as axes slice through gun smoke. Its highly individual style may mean it doesn’t quite act as a game-changer in the way Spielberg’s Omaha Beach did, but if the potency can be replicated, that would be a great success. The tension is one thing that does manage to endure – through the bear attack, several scrapes with the Arikara, a fall from a cliff and a final confrontation – but its dissipated by some fuzzy geography and an odd, surprising lack of narrative drive. Though there’s an awful lot to be admired – not least an enormously impressive soundscape – The Revenant ultimately lacks the nerve-jangling thrills or the spiritual resonance that it strives for.