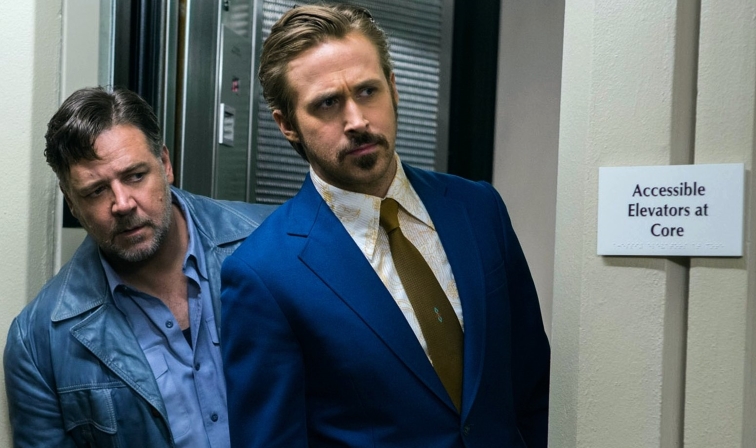 There’s no better way to transport a cinemagoer back to the late 1970s than with Papa was a Rolling Stone by The Temptations. The tap of a snare drum and slow groove of a rhythmic bassline set a steady beat for The Nice Guys, a mordant crime caper and buddy movie from writer-director Shane Black that hits the ground running and never looks back – for fear of being knuckle-dusted right in the kisser, shot, run over or thrown off a building. Glorious mayhem reigns left, right and centre in one of the best – and certainly funniest – films of 2016 to date.

Russell Crowe and Ryan Gosling, both on tremendous form, star as a punch-first-ask-questions-later fixer and amateurish private investigator respectively whose paths cross over the death of an adult film star, the disappearance of another and a City Hall conspiracy of the motor industry and Los Angeles air pollution. With a wink towards film noirs of days gone by, a keenly nostalgic eye and tongue firmly in cheek, Black’s script and direction is right on the money from the get-go. Riddled with a litany of perfectly pitched one-liners and jokes, and delivered with superb comic timing, frequent winks and sideways glances by both leads, The Nice Guys induces belly-laughs from start to finish. The boys careen around the hills of Tinsel Town, along its vast boulevards, bust up parties, roll down hills, find dead bodies and question everyone – including some mermaids – in their quest for the truth.

Equally as calamitous a detective duo as Robert Downey Jr. and Val Kilmer in the director’s Kiss Kiss Bang Bang, and with the hate turning to love relationship of Mel Gibson and Danny Glover in the Lethal Weapon series, which he penned, Healy and March are on the case. At least they’re trying to be. Free alcohol, breakneck car chases, hitmen, meddling clients and a mounting body count complicate matters somewhat. Though these nice guys may struggle to keep a lid on things, Black grips his jam- packed bag of tricks with a sure hand and there’s no confusion or lull in proceedings for an audience. The pacing sky rockets early on, mellows out a little and takes off again in the final act, the director ensuring there is never a dull moment. Amongst all the madness there is, however, a bittersweet edge to the plot. Gosling’s March has no sense of smell and although derided by his partner for this detective shortcoming, a latter revelation tinges that particular gag with sadness as reasons for the death of his wife become clear.

The inclusion of March’s daughter, Holly (a wonderfully witty, plucky turn by young Aussie Angourie Rice) in all elements of the case, herself a very efficient PI, grounds the film and exchanges between her and each of the men develops real depth and balance. A stellar soundtrack, including Earth, Wind & Fire, The Bee Gees and America, and superb retro costume, set design and production which is wall to wall aviators, sequins, big collars and ever bigger hair, top off two hours of unadulterated cinematic joy. The Nice Guys could well mark the beginning of a beautiful friendship. Black has really thrown the kitchen sink at his latest project and it all works tremendously. Let’s hope there’s more to come.