Film Review: Born to Be Blue 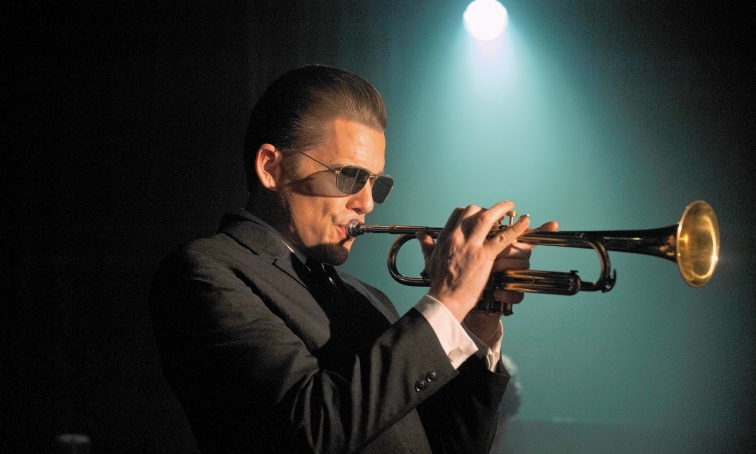 Joining other films that revel in a bygone era (Inside Llewyn Davis, On the Road et al.), Born to Be Blue is a captivating portrait of the shadowy remains of jazz musician Chet Baker. Anchored by a wistful, wincing Ethan Hawke, this film is well worth the watch. What comes through in every frame is not only loving direction from Robert Budreau but an equally loving script. There’s atmosphere, music and a sharp story-within-a-story nesting doll device which helps viewers better grasp Baker. Born to Be Blue shines.

The version of Chet Baker (Hawke) we know here is the careworn version. A haggard junkie with a glossy veneer, Chet is angling for his big comeback in the early 1960s, after a stint in jail and the threat of prison looming if he can’t stay on the straight-and- narrow. When the biopic of life (starring himself) falls through after a run in with the law, Chet finds that he has to once again work his way from the bottom to the top. It’s a quiet determination that compels him, a strong foundation of love from his actress girlfriend Jane (Carmen Ejogo) and the weight of past sins that push Chet forward. There are no histrionics, no major melodrama. Yes, Chet relapses. He’s myopic in his quest for glory regained. But he’s also charming. That is, perhaps, down to Hawke’s deft grasp of his character – but it makes for darn good viewing.

The real selling point of Born to Be Blue is the very palpable chemistry between Hawke and Ejogo. They bounce off each other so rapidly and easily you fall in love with them a little yourself while you watch. Ejogo makes Jane into a woman that is modern, tough and compassionate but never willing to be a doormat to Chet. It’s an excellent interpretation. Hawke is exhibiting his unique nuance for depth that is echoed in other career-best performances (go back to Reality Bites and Boyhood for more). You can’t pin Hawke down here, but that’s half the fun. At times, he’s so vulnerable he’s like an open mollusc with a pearl ready for grabbing; other times, he’s shut down, strung out, wild in Chet’s skin. These performances, along with Budreau’s singularly deft direction, make Born to Be Blue unmissable.