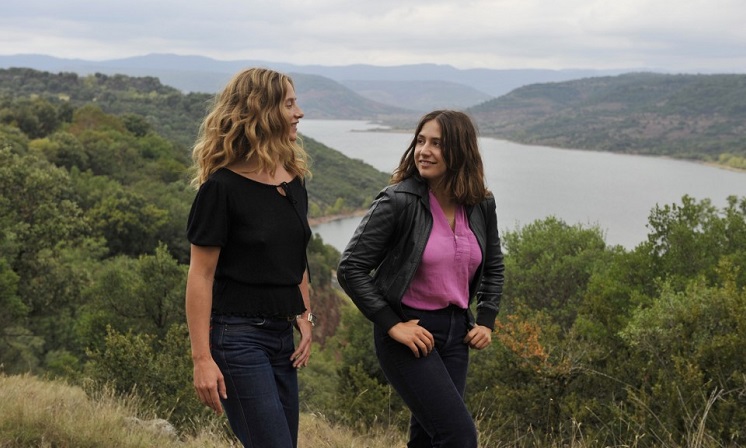 Summertime is a well-made, well-acted French art-house flick that unfortunately doesn’t have anything worthwhile to say. Veteran director Catherine Corsini’s new film starts off as a promising and energising political thriller about the nascent feminist movement in post-1968 Paris, reminiscent of Olivier Assayas’ excellent Something in the Air. But then it inexplicably degenerates into a kitsch, predictable and at times exploitative tale of forbidden lesbian romance in the French countryside. Even worse, the juxtaposition of the struggle for gender equality with the relationship between Carole (Cécile De France) and Delphine (Izïa Higelin) cannot avoid implying – one must assume unintentionally – that feminists are nothing but sexually frustrated and confused women.

There is a real electricity in the opening scenes of Summertime as Delphine leaves her farm for Paris and gets involved with the bourgeois feminist militants led by Carole. Their antics involve fondling men in the street to give them a taste of their own medicine and throwing animal parts at an anti-abortion doctor who likens drivers obliged to follow the rules of the road to pregnant women whose “passenger is life”. They sing rousing songs of “enslaved women” standing up against their oppressors and rail against intelligent women censoring themselves in the presence of men. Yet for some reason, Corsini is unwilling or unable to take this concept forward. Instead, Delphine aggressively seduces Carole and turns her away from the movement, eventually luring her back to her home on the farm. These scenes are where Summertime is at its weakest and most tedious, and unfortunately they comprise the majority of the film.

Carol and Delphine attempt to pursue their illicit relationship while hiding it from the latter’s prudish mother (Noémie Lvovsky) and the town’s equally prudish residents, sneaking in kisses behind bushes and rolling around naked in the long summer grass. It feels like material that belongs in teenage fiction rather than serious cinema for grown-ups, while the overtly graphic and sexualised way in which Corsini films their trysts is at complete odds with the film’s earlier messaging. Messaging in general is a problem for this film, with themes such as urban sophistication versus rural backwardness and the unacknowledged contribution of women to agricultural work touched upon but never really developed. To top it off, Corsini throws in a heavy dose of sentimentality with a fluttering piano score by Grégoire Hetzel, and a cringe-inducing climax consisting of a farewell on a train platform and a love letter read out in teary voice-over. Despite a promising concept and strong production values, Summertime‘s poor execution makes it one to avoid.