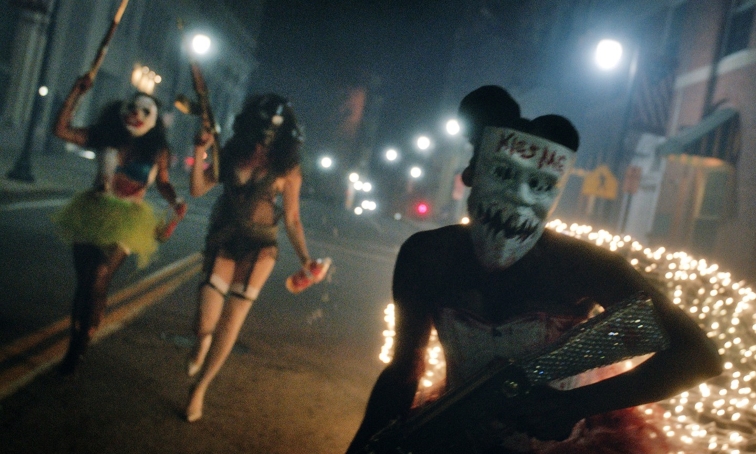 The New Founding Fathers of America have decreed that every year on 12 March for the space of twelve hours all criminal law will be suspended. If you want to attack someone you can, assault and murder are not only permitted but encouraged as a way of collectively purging the populace of all their negative energy and reducing crime year-round. Starring Ethan Hawke, the inaugural The Purge was a surprise low-budget hit and with its small, house siege scale, the silliness of the premise was not an obstacle to a bit of fun. The follow-up, The Purge: Anarchy, had a larger budget and with it more ambition in basically taking us outside on Purge night and remaking The Warriors in the process.

Along with a geographic shift, there was also a reach in Anarchy for an allegorical importance, some kind of social commentary written with a chainsaw and reinforced baseball bats. The Purge: Election Year takes the social commentary even further and in the process makes the silliness less enjoyable. Presidential candidate Charlie Roan (Elizabeth Mitchell) has suffered personal tragedy as a result of the Purge and is running on a ticket that hopes to make it illegal. On the night of the Purge itself a plot to assassinate her is foiled by the head of her security detail Leo Barnes (Frank Grillo, from the second film in the series). Having been winged by a bullet. Leo must get Charlie to safety, avoiding a militarised death squad in a helicopter as well as the ordinary citizens who are out purging. The weird thing is the purgers themselves seem more intent on elaborate cosplay and monologue-ing than murder and so have a tendency to leave themselves open to being offed with relative ease.

A local shopkeeper (Mykelti Williamson) defending his deli with a machine gun and an ambulance driver (Betty Gabriel) with a penchant for hit and run join forces with Leo and his charge and there is much talk of people having to trust each other and society coming together. The fact that the white lady running for office needs the help of the black city folk to win against the crypto-fascists of a whiter than white establishment might ring some bells, but the problem is that real life has outrun writer-director James DeMonaco’s attempt at “savage satire”. How can the women dressed as anime characters wielding gold-plated AK-47s hope to compete with footage of Donald Trump? It just seems lame by comparison.

DeMonaco ultimately lays bare the contradictions and the daftness of his original premise. Audiences watch the film for the violence, the blood-letting and presumably the terrible dialogue, in which case the crusading politician who wants to put an end to the Purge ought to actually be the villain of the piece, the spoilsport rather than the heroine. The action is diverting enough, but as another on-the-run movie it’s too similar to the second film and lacks the tension of the first. The charisma hole that is Grillo doesn’t help matters and he doesn’t get more interesting for getting shot at the start of proceedings. Next could be The Purge: Overseas, or perhaps The Purge in Space, but if it were all to end here then The Purge trilogy will go down as a surprising bit of nihilistic fun that got increasingly dull as it went on.