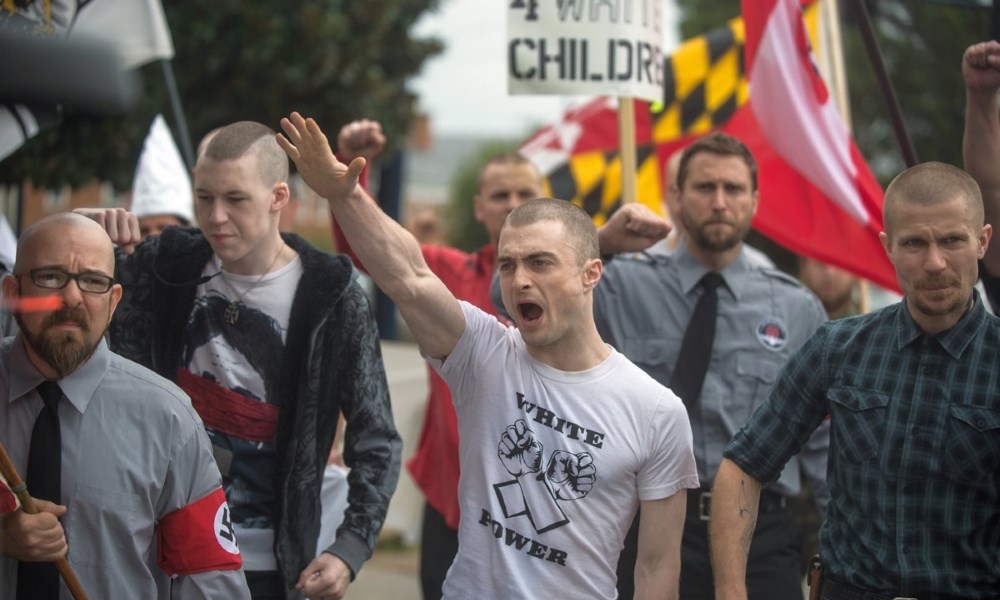 For its many faults, Imperium has noble intentions. Inspired by incendiary true-to-life events, its narrative charts an undercover FBI operation to expose a plague of nationwide racial hatred, white supremacist groups and an impending terrorist act on Washington DC. An attempted indictment of right wing intolerance and illegal activity, it’s disappointing that this Daniel Radcliffe-led thriller never surprises, truly engages or gets under the skin. The essential irony of writer-director Daniel Ragussis’ debut feature is that it features a socially awkward, justly terrified rookie transformed into a skinhead.

In feigning the tough guy act without the requisite skills or experience, Radcliffe’s character, Nate, symbolises a film where dramatic plausibility is stretched beyond all reason and one whose is pacing is frustratingly dull. Radcliffe has certainly proven his worth on stage and screen after cutting his teeth on little known wizarding series Harry Potter and he throws himself into this role but his diminutive size is an issue from the off. A tense opening sting sees him dressed in bullet proof jacket and an ostentatious, enormous, FBI cap. Told to wait in the car, it’s almost like he’s on his way to a friend’s birthday party, not foil a potentially devastating bomb explosion. Having suffered as a child, Nate wants to help others avoid such a fate and the US government’s scapegoating of Islamic individuals for any and all ills rubs him the wrong way. His raison d’être is a cliché but nonetheless an honourable one.

Much anguish and woe pass fairly swiftly as classical musical fan and desk agent Nate is persuaded by boss lady Angela Zampora (Toni Collette) to do his bit to take down the bad guys who have seized a shipment of caesium. Newspaper headlines, internet hits and a frightening array of images edited together at light speed show the Klan, and other hate groups, as strong as ever at rallies, burning crosses and generally being despicable humans. But Nate shaves his head, puts on some jackboots and a bomber jacket so he’ll be fine, right? His transition from one character to the next borders on the Dr. Jekyll and Mr. Hyde such is its ease but there is really never the slightest suggestion any harm will befall Imperium‘s hero even as he is dwarfed, literally, by an entourage of monstrous, fascist heavies.

His superior intelligence easily diffuses most situations given the brainless numbskulls he is forced to befriend but for all talk of fanaticism and the threat of recrimination or exposure, their violent attitudes are never particularly menacing. The indoctrination of children in an occasional familial setting – with swastika cupcakes, no less – is perhaps the most disconcerting element of plot but characters that lean so much on the rhetoric of Hitler and other historical touchpoints never seem to have an original thought and the same applies to Imperium. Nate affirms at several junctures that he “wants to make a difference.” Ragussis’ film sets out with the same intention but the end result is largely forgettable.