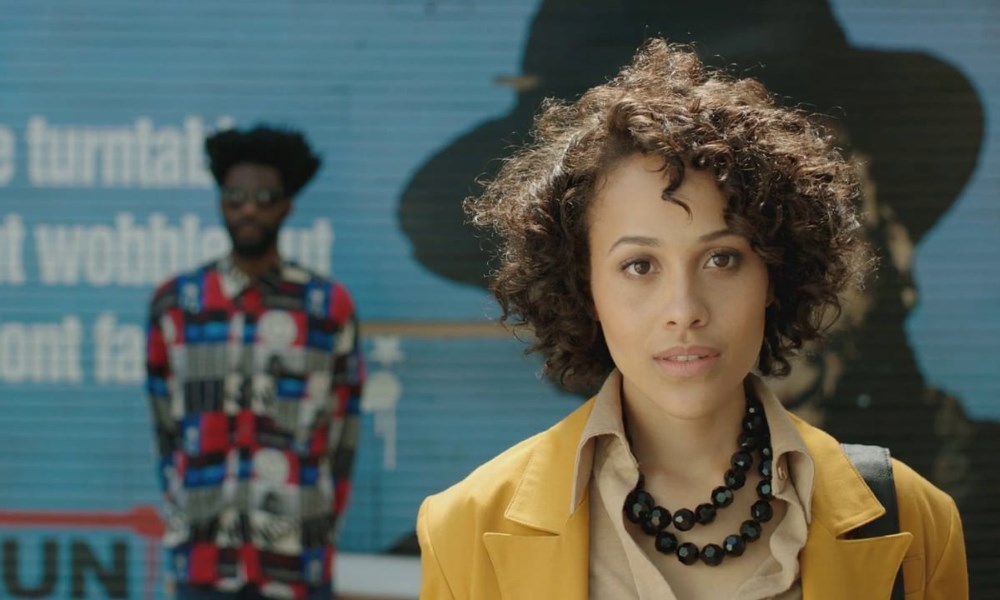 Do you dabble in kale? Nina (a wonderful Tanya Fear), the lead protagonist of Shola Amoo’s docudrama A Moving Image, jokingly says she could eat it all day, every day. While chomping down on the unappetising health food, the suggestion of a grimace plays on her face.

With the camera of a visual arts project turned to face her by friend and collaborator, Isha (Hussina Raja), the Brixton native seeks to extricate herself from the quinoa yuppie brigade upon returning to live at the southern end of the Victoria line. A Moving Image is a critique of gentrification situated somewhere between a Spike Lee joint and the recent works of Ira Sachs. Imbued with the cutting feistiness of the former and charm of the latter, it is built around a well drawn and engaging protagonist who, having spent a number of years living in Shoreditch’s gluten-free hipster central, returns to find the diversity of her home turf under threat from housing developers.

The simple title, loaded with meaning, should not disguise just how much is packed into this profound and articulate debut feature from a very promising London-based filmmaker. It deals with the movement of people, an influx of outsiders buying up cheaper property and exodus of locals forced to relocate, and the consequent changing face – and image – of one of London’s most richly diverse areas. Clearly a passionate advocate and believer in the future path of the Borough of Lambeth, Amoo treats his serious subject matter with both profound sincerity as well as a tongue-in-cheek humour, sending-up the meaningless fads and fashions of our times. Nina first enters the frame exiting the Tube in slow-motion as all around her is frenetic hustle and bustle.

A less than satisfactory audition leaves her in need of a challenge and it is with Isha that she embarks on filming people in the streets, conducting interviews and attending the Reclaim Brixton demo to better understand the problems faced by her community and what she can do to help the cause. Unlike the anarchist, anti-establishment bent of Occupy movements of recent years, Reclaim Brixton was at its heart a celebration of the area and its people, tinged however with resentment at the changes witnessed. Fusing A Moving Image with a documentary edge, in choosing to have Nina film interviews first hand with much loved – and often misunderstood and mistreated – local personalities, Amoo makes this feature a deeply personal endeavour. And that translates to the screen and our appreciation of the plight of social conscience it espouses.

Though localised in Brixton, the director cleverly opens up the issues at hand here as Nina sets up an online forum as a means of connecting with residents of other cities around the world affected by astronomical rents and the diluting of their communities. Testimonies from Berlin, Brooklyn and Harlem speak to gentrification demolishing tradition and the interwoven fabric of communities with the destructive force of a wrecking ball. A subtle love triangle places Nina at the point of opposing forces within this debate and Fear, like her director, is one to watch for the future.