Nuri Bilge Ceylan has established himself as one of the most innovative directors working in film today, with the Turkish director – initially a photographer before switching to filmmaking in the mid-1990s – already distinguished by a BFI retrospective. Comparisons with Antonioni, Fassbinder and Tarkovsky are well founded, though Ceylan has an entrancing style entirely his own. Three Monkeys (Üç Maymun), which won Ceylan the prize for Best Director at Cannes 2008, upturns the positive message of Confucius’ simian allegory of ‘see no evil, hear no evil, speak no evil’ into a negative study of what occurs when silence fetters.

Driving alone at night on a country road, the politician Servet (Ercan Kesal) hits and kills a pedestrian. Fleeing the scene and fearing the impact the incident might have on a forthcoming election, Servet offers Eyup, the driver who would normally have accompanied him (played by Yavuz Bingol), the chance to accept the blame in exchange for a large payment to be made upon his release (after a nine-month sentence). The seismic repercussions of this act, in all their moral complexity, form the central narrative of the film. With deft subtlety, Ceylan blends the generic conventions of noir and melodrama, slowly revealing how the individual characters are affected by the tragic events. 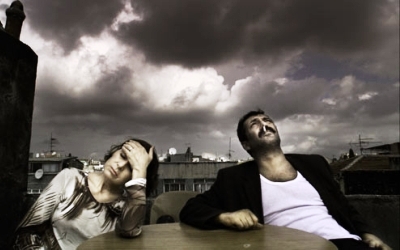 Ceylan tells his story at a slow, almost ponderous pace, utilising his trademark long takes and close ups whilst cinematographer Gokhan Tiryaki captures a succession of arresting compositions in sharp, high-definition video. In one scene, an electric storm striking out over the open sea (perhaps symbolising the tensions charging within the confined domestic space and the individuals therein) perfectly encapsulates the forces at play. In keeping with his disdain for music in film, Ceylan conjures anxiety and unrest through deep silences, punctuated only by occasional bursts of atmospheric sounds (e.g. ship’s horns resonating across the sea; the roaring commotion of a passing train).

The three main characters involved in Three Monkeys’ central Chekhovian triangle of betrayal all enter into corruption through a sense of duty, sweetened with the promise of personal gain through cash, power or sex. Eyup acts in service to his employer and thereby the political power of his country, but also hopes to use his reward to better the financial security and living conditions of his family. Servet acts for his party and country, but the eventual election victory also bolsters his own personal standing. Seeking an advancement to buy a car for their teenage son, Eyup’s wife Hacer (Hatice Aslan) enters into an affair with Servet which grows into unreciprocated infatuation as she enjoys the sexual freedom enabled by her husband’s incarceration.

However hard the film’s characters try to cover up their personal betrayal from one another, the more the silence breeds both suspicion and rage, boiling beneath their grim countenances. Sitting comfortable beside his previous features, the excellent Distant (Uzak, 2002) and Climates (Iklimer, 2006), Three Monkeys is further testament to Ceylan’s unique talent for using cinema to force us into asking deep moral questions, for which there are often no simple answers.

Watch Three Monkeys now and for free at streamuniverse.tv.