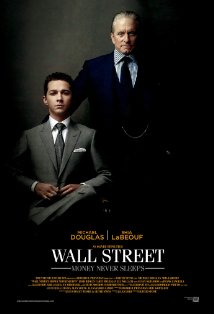 The original Wall Street was one of those films that defined the era in which it was made, as well as providing us with workable credos such as “greed is good” and “lunch is for wimps.” It earned Michael Douglas – already a very seasoned actor and producer – an Oscar for his role as Gordon Gekko, although he himself believed that he got the award due to him doing Fatal Attraction (1987) (another era defining film) and Wall Street back to back.

Wall Street had a simple story arc, a classic maturation plot with the bad guy getting his just desserts at the end. Wall Street: Money Never Sleeps (2010) on the other hand is a far richer and more complex work. We start with the release of Gekko (Douglas) from prison, complete with iconoclastic 80’s mobile phone, a piece of heavy symbolism to show what a relic he is. How unloved he is becomes apparent when, unlike the other newly released, there is no one there to pick him up. 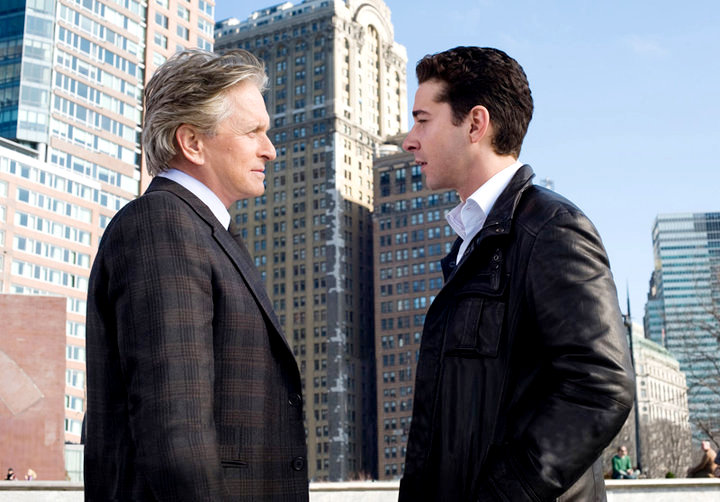 The story at this point is mosaic: we leave Gekko for a few years as we are introduced to a new set of main characters whilst the opening credits are still rolling, with protagonist Jacob Moore (Shia LeBeouf) providing an initial voice over analogising The Cambrian Explosion (the ecological birth of complex organisms) in comparison to economic shifts. Jacob soon finds himself under the wing of the kindly Louis Zaber (Frank Langella), an “old school” investment banker who claims that modern trading is no more than “a bunch of machines telling us what to do.”
The film’s supporting cast are also hugely impressive; Bretton James (Josh Brolin) is the corporate, testosterone fuelled monster, whilst Gordon’s daughter (and Jacob’s love interest) Winnie (Carey Mulligan) brings together young buck and seasoned pro effectively. One misjudgement however is the reappearance of Charlie Sheen’s Bud Fox, a needless embarrassment for us and for him, which feels far too much like a forced gesture.
With Wall Street: Money Never Sleeps, Stone has created a thrilling and timely drama, encompassing subjects from the Global Recession to the remnants of 1980’s Reaganism within modern America. However, it is the film’s outstanding cast that truly steals the limelight. Against the odds, Wall Street: Money Never Sleeps proves itself to be a mature, clever film for grown-ups.