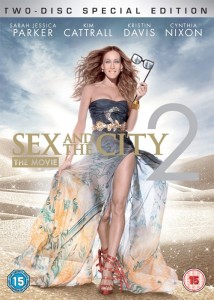 There is no doubt that the Sex and the City franchise is one of the most successful in television history. The series is popular with teenagers and women alike, and its stars have become style icons for fans to the point where many have dressed for theatre showings in attire that wouldn’t seem out of place in a city nightclub.

The franchise is undoubtedly popular amongst females for its representation of modern, successful women: Carrie (Sarah Jessica Parker), Charlotte (Kristin Davis), Miranda (Cynthia Nixon) and Samantha (Kim Cattrall). Six television series and now two films later, how does this latest instalment represent female values, life ‘at the top’ and does it communicate the right values to its female audience?

Sex and the City 2 takes place two years after the first film; Carrie, Charlotte and Miranda are enjoying married life and their careers. Samantha is still a ‘woman’s woman’, single and longing for her youth. The film is split into two parts; the first of these, set in New York City, brings the audience up to speed with what the girls have done over the past two years. It also serves to reveal the cracks in the girl’s lives; Carrie is in a rut and her marriage to John ‘Mr. Big’ Preston is not going as well as she hoped, whilst Charlotte is feeling the stresses of parenthood and Miranda is pressurised at work. Predictably, the second part of the film aims to remedy all the ailments of these ‘stressful’ existences. The gang thus take a deserved vacation to Abu Dhabi after Samantha receives an invite from an old client and discover exotic locations, sisterly love and overt racism.

Ultimately the film makes a mockery of an entire culture. This varies from passive-aggressive racist comments to cringe-worthy demonstrations of so-called ‘Western freedom’. The racism, however, does not just manifest in Abu Dhabi. Miranda and her family have a stereotypical Italian maid, whilst Charlotte employs an Irish nanny who throughout the whole film neglects to wear a bra, much to the girls’ distress. To further adhere to stereotype, these scenes are often accompanied by cliched Irish folk music.

A lot of the more obvious racism is centred on the dress of Arabic women. Miranda, who appears to be the most diplomatic and understanding of the group is constantly telling Samantha to cover up in public (much to Samantha’s chagrin) in order to not offend the local Muslim populace. The gang also observe an Arabic woman eating a serving of French fries, with Carrie referring to her table manners as an “insult to fried food”. However, the two most shocking instances of racism occur in the latter part of the film: when Carrie loses her passport, a helpful shopkeeper keeps it for her. When it’s finally back in her possession she then idiotically remarks, “Praise Allah!”

Secondly, to elaborate on the film’s ham-fisted promotion of ‘Western freedoms’, there is a scene in which Samantha drops her bag in the middle of a crowded market, spilling a multitude of condoms across the floor. When the locals express their dismay, Samantha reacts in a frenzy of gyration and thrusting whilst screaming, “I have sex!” This, however, is all a build up to a rather tame chase scene in which the girls escape the angry mob in – you guessed it – their own burkas. This caper is meant to be comedic; instead it is wildly inappropriate and offensive.

Sex and the City 2 is very much a representation of American ‘freedom’ through materialism. The girls are all rich, successful and living in “the Land of the Free”. It embraces Western consumerism; both Apple and Blackberry have numerous promotional placements as do a number of different fashion designers. As well as being shamelessly consumerist, the film expresses naive views on modern parenting. In a drunken conversation, Miranda and Charlotte joke that they don’t know how parents bring up children without the help of nannies, as if in blissful ignorance of the countless single parents who bring up children without any help.

Overall, Sex and the City 2 fails on nearly every level; the story is weak and leaves you feeling unfulfilled. There is a disappointing appearance from British comedian Omid Djalili – known for his anti-racist material – in a film that is so overtly xenophobic. The film aims to promote feminist values – the girls singing “I Am Woman” in an estrogen fuelled karaoke session – but this simply comes across as contrived, inaccurate and desperate, three words which sum up this film rather well.