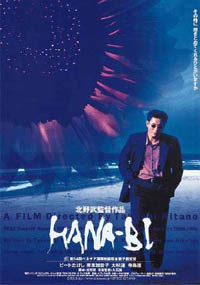 Takeshi ‘Beat’ Kitano is without doubt one of the most influential figures in contemporary Japanese culture. From his humble beginnings as a young stand-up comic to his professional transition into the world of television and filmmaking, his rich and vastly dynamic career has spanned several decades and has seen him become one of Japan’s most successful on and off-screen entertainers. Last weekend in recognition of his work, the multi-arts centre behemoth, the Barbican Centre, hosted a special retrospective look at some of movies he has made in his vibrant filmmaking career. CineVue went along to see the first film of the programme, the highly acclaimed Hana-Bi (Fireworks, 1997).

What makes Kitano’s film so special – and unlike the Tarantino-school-of-filmmaking – is that in his fusion of comedy and violence, Kitano frequently takes a minimalist approach, sometimes leaving the act of violence completely off-screen and instead only shows the consequences of these events. Again, through its use of violence and humour, Hana-Bi is perhaps one of Kitano’s most personal films, made at a time when he supposedly was coming out of a bout of depression, the film perfectly reflects his vision of the world, being simultaneously cheerful in some ways, and austerely bleak in others. In Kitano’s hands, Hana-Bi – essentially a simple tale of cops and Yakuza – becomes a Zen-like meditation on the values of loyalty and honour, love and death. 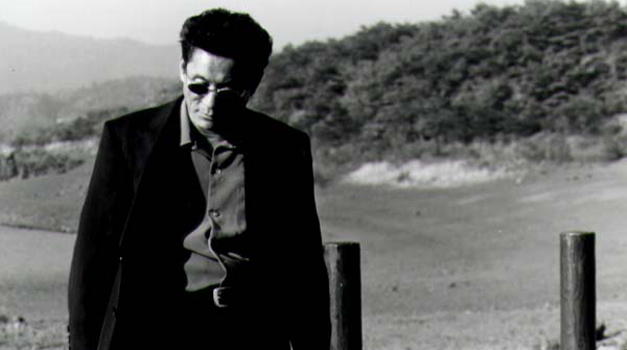 The narrative follows the protagonist Nishi (Kitano), a violent and unpredictable detective who leaves his partner Horibe (Ren Osugi) alone on a stakeout so he can visit his terminally ill wife (played by frequent Kitano collaborator, Kayoko Kishimito). At the stakeout, events do not go according to plan and Horibe is involved in a horrific shoot out which leaves him paralysed from the waist down. Nishi’s subsequent vendetta to assert retaliation for what has happened to his colleague leads him into getting a third detective injured and another killed in a sequence which holds tremendous visual power. This central sequence unfolds in a Tokyo mall and in its stark and visceral directorial execution proves to be the violent scene in the movie, but one which is more abstract than gratuitous, revealed to the audience in bits and pieces through the fractured psyche of Nishi.

Feeling an incredible burden of guilt and struggling to care for his wife, Nishi subsequently retires. In an attempt to provide for his wife and colleagues he is willing to almost do anything for their happiness which leads him into a number of awkward positions and constitutes towards a tense and climactic ending. Overall, Kitano’s Golden Lion-winning film mixes tenderness and violence to great effect, with the latter coming sudden, brutal and almost all in the editing. Hana-Bi is a film which has all the common traits associated with a “Beat” Takeshi production and as always features one of Kitano’s taciturn, impassive and bleak protagonists-in-crisis.