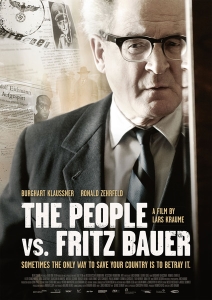 Given the subject and its original title, Lars Kraume’s The People vs. Fritz Bauer (2015) pits the irascible and implacable attorney general against the West German state, rather than its people, which would be more accurate from both a linguistic and narrative point of view. Cantankerous and belligerent but driven by a burning determination to bring war criminals to justice, the renowned lawman (Burghart Klaußner) was persistently thwarted by an establishment not ready to face Germany’s actions in World War II. Bauer proclaims early on that he “likes hunting, but not for animals”. In a less violent but equally vindictive manner as Inglorious Basterds’ Aldo Raine, Bauer is on the hunt for Nazis. 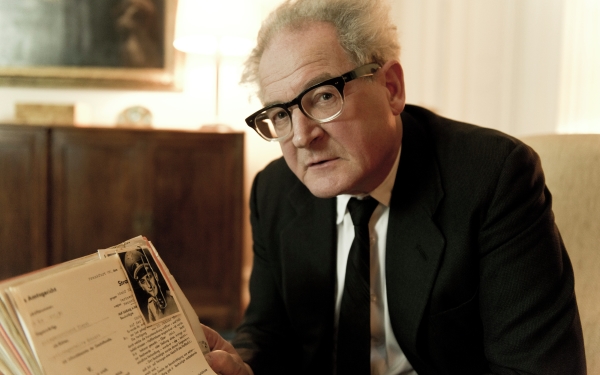 Making things more difficult for Bauer, in the late 1950s many Nazis had taken up residence in South America, some even worked for Mercedes-Benz but a large number held positions of authority in Konrad Adenauer’s government, secret service and police. Were they above the law? Fritz Bauer certainly didn’t think so. Unafraid to bite that hand that fed him in spite of threats against his life, Bauer went for the biggest fish of them all. The People is a film chronicling his role in the search for Adolf Eichmann, former SS lieutenant-colonel and one of the main proponents of the Nazis’ Final Solution, responsible for coordinating the deportation of Jews to camps in Eastern Europe.

Constantly fed misinformation and led down blind alleys by colleagues with skeletons in closets, Bauer made the treasonous move of enlisting the help of Mossad in pursuing and apprehending Eichmann in Argentina. His role in the Israeli operation – as end notes inform us – would not be made public until a decade after his death but The People vs. Fritz Bauer is a fitting tribute to a brave and forthright champion for the truth, centred around a fine performance by a gruff, white-haired and horn-rim bespectacled Klaußner who chain smokes cigars à la Winston Churchill throughout. Unfortunately, where The People strays into somewhat murky territory is in the semi-fictionalised subplot of a shady past which encroaches on the present. A Danish arrest warrant – Bauer lived in both Denmark and Sweden between 1935 and 1949 – for soliciting male prostitutes is initially threatened as leverage but then miraculously forgotten. Conveniently, the young lawyer, Angermann (Ronald Zehrfeld), who shares similarly honourable juridical values and is enlisted to help, also shares his mentor’s proclivities for extra-marital affairs with transvestites.

Sticking to the momentous task that the two men undertake, and further developing Bauer’s socialist past and time spent in a concentration camp besides fleeting allusions, would have provided the director with more than enough material and this departure felt like an unnecessary contrivance to personalise, or perhaps sensationalise, the story. Kraume’s picture is nonetheless an engaging, if not riveting, watch. The pacing is methodical but breakthroughs in the case and anxious moments where all is feared lost generate real tension. The jazz-based soundtrack adds an almost film noir edge to sinister proceedings and the period set design and costume are superb. Speaking in the grainy library footage which opens The People, Bauer compares a nation’s history to night and day, darkness and light, evil and good. Contemporary Germany certainly finds itself in the latter half of each antonym but films such as this – as well as Labyrinth of Lies, which featured at TIFF last year – demonstrate that the process of healing, of confronting the shame of history and accepting the ills of former generations can take lifetimes. It’s lucky for us that principled men like Bauer got the ball rolling long ago.