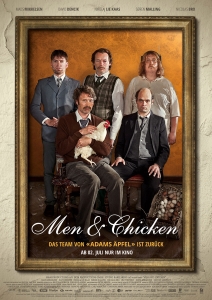 The sanctity of life and the value of family are not necessarily two themes you might expect from a twisted black comedy filled with violence and bestiality. That is what Anders Thomas Jensen delivers with his first feature film in a decade, the grotesquely bizarre crossbreed that is Men & Chicken (2015). Swinging wildly from unpleasantness and vulgarity to philosophical contemplation may sound like a film for niche audiences, but overflowing with slapstick humour and outside-the-box performances from barely recognisable Danish stars, the film has broken box office records in its home country. Like some perverted fairytale nightmare, Hans Christian Andersen would be proud and absolutely terrified. 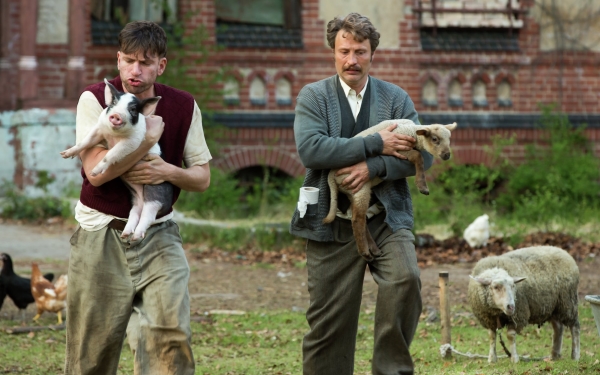 The positive themes of acceptance and harmony are viewed through the most distorted of looking-glasses, which may even have had the Grimm Brothers diverting their eyes in mild discomfort. Fraternal siblings are indeed the order of the day when oddballs Gabriel (David Dencik) and Elias (Mads Mikkelsen) learn of their true parentage from a poorly framed confessional video left by their recently deceased man they knew as dear ol’ dad. Tracing their biological roots they arrive at the old sanatorium that is home to their mysteriously bedridden father and three further brothers in the brood – Franz (Søren Malling), Gregor (Nikolaj Lie Kaas) and Josef (Nicolas Bro).

The revelation that they were all born of different mothers who each coincidentally perished in childbirth sends them on a quest for answers about who they are and where they come from. Hidden beneath a heap of monstrous make-up that gives all five brothers malformed features included a mutual cleft-lip, the actors are clearly oodles of fun with the macabre material. Audiences familiar with Mikkelsen – and particularly his work on Hannibal – will have a ball with his awkwardly macho sex addict, who always carries a toilet roll around with him in order to release his tension when necessary. The quirky character traits all tread fine lines with regards to taste; Franz has a penchant for battering the rest of the herd with a unending supply of taxidermy. Arrested development is evident throughout the nest, with the effectively absent father having not really raised the trio of boys that he kept either. Their actions are always childlike but these forays into puerile humour are consistently upended by the increasingly dark narrative and accompanying philosophical musings. Religion and science butt proverbial heads more than once, most notably in a stand-out scene in which the strigine Gabriel attempts to discuss biblical morality with his newest siblings who can’t get past the literal impossibility of the stories. The questions surrounding the missing mothers (echoed by a missing stork in the local community) lead to further ethical quandaries that are best left discovered during the film. There is meaning beneath the madness, but Men & Chicken is best recommended to those who are prepared to sit through the deeply sinister absurdity.