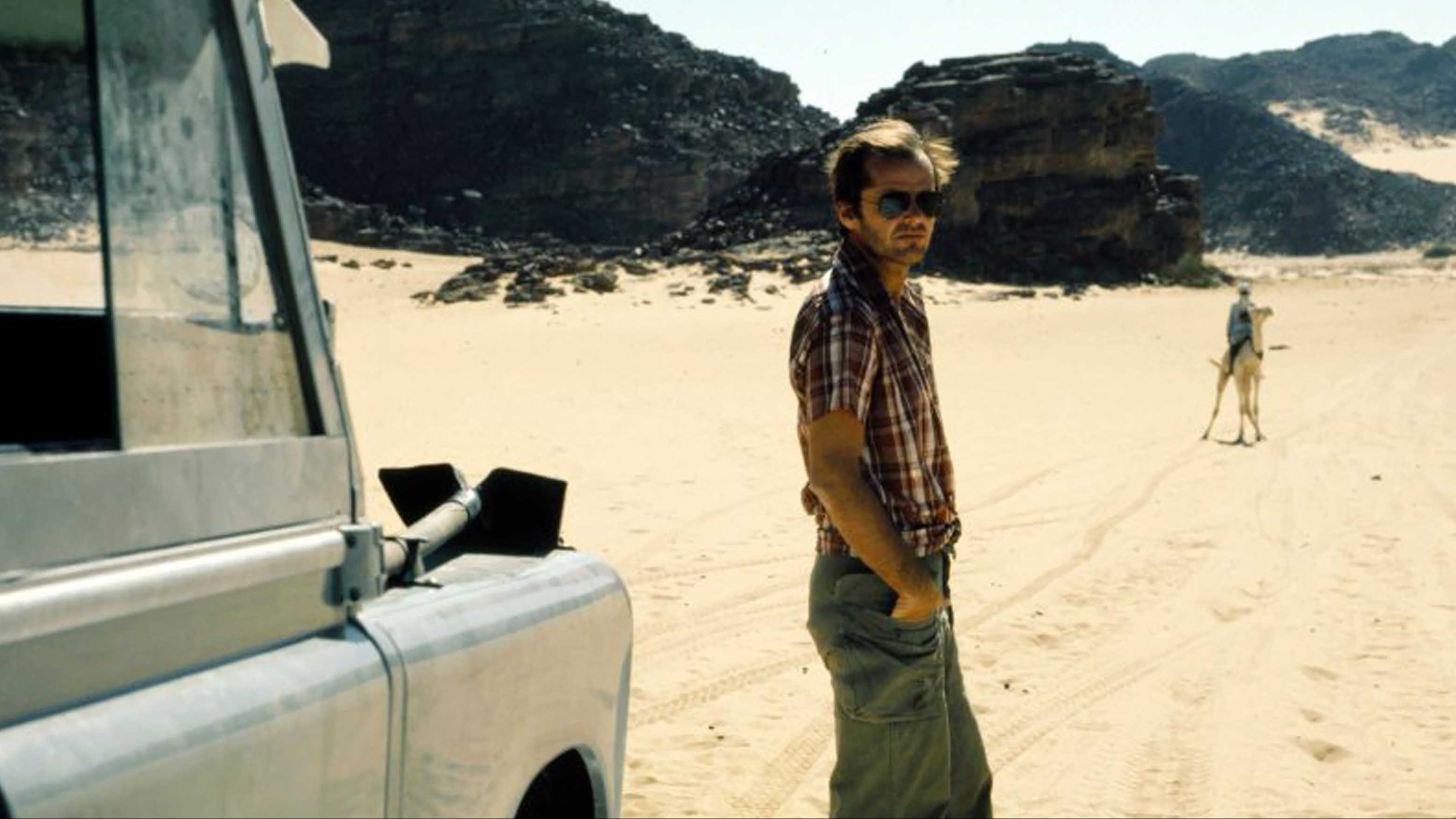 A testament to the enduring legacy and reverence of Michelangelo Antonioni, The Passenger returns to UK cinema screens in a new 4K restored format. A somewhat underappreciated yet still important part of his oeuvre, the film’s final dazzling shot embodies all that makes The Passenger such an organic, spiritual and quietly disconcerting work.

Marking the end of Antonioni’s English-language trilogy after Blow- Up and Zabriskie Point, the release allows its potent themes of identity to resurface allowing, as channelled in the BFI’s month-long retrospective, a complete revisionist approach to the Italian’s seminal modern filmmaking.

Backed by the powerful production of Carlo Ponti who produced around 140 films in his time, Jack Nicholson stars as David Locke, an investigative journalist. His character in the early moments of the narrative decides to create a new identity around a dead man (Charles Mulvehill) he uncovers in his hotel. Yet, the identity he assumes ends up leading him down a path of first freedom to secondly lethal repercussions.

Acting out on a global scale, the breadth of locations utilised in the film eclipses anything previously shot by Antonioni. Speaking of such an occurrence, L’eclisses’ themes – along with that of La Notte et al – still feel omnipresent; a man out of love, a lack of identity and spiritual turmoil. The isolation which is evidently felt by Nicholson’s character is heavily pronounced in the desolate landscapes in Chad, Central Africa.

Later translated to 1970s London, the composition frames of Luciano Tovoli draw the viewer in with their structure around space in a scene. Reflected in the instance of Locke visiting his previous home in Notting Hill, the director presents a sequence showing his ’widow’ Rachel (Jenny Runacre) sat alone watching news footage of her husband interview talking heads. In the moments when Locke returns home, a wider lens is deployed to draw attention to the depth of living room around him. No matter where Locke goes, he is destined to spiritually feel alone.

Restrained in this approach, Tovoli’s cinematography is a stark juxtaposition to the frenetic approach he deployed two years later in Argento’s Giallo masterstroke, Suspiria. Encountering Maria Schneider’s character on his travels around the world, the thriller elements of the script become prominently pronounced in her place in the story. Lacking the dynamism which is conjured up when recalling previously male-female relationships in his filmography, Schneider is as much the titular being as Nicholson comparably is.

Deploying a deep focus on the diegetic sounds of this world, The Passenger draws one in further through this restrained approach. All in all, this creates a whole new layer to a scene, as well as underlying detail that no establishing shot could muster. Strengthened in Nicholson’s quiet performance that lacks any over-dramatic features as more symbolic of his other roles, the actor comes to elevate the work as previous Antonioni leads before him; Mastroianni, Moreau, Delon and Vitti.

Ending on a cyclical note through Tovoli’s sweeping camera as it tracks Nicholson attempting to escape from police, it’s a shot that not only lingers once the final credits have rolled but over the Italian’s filmography as a collective. It’s a touching reminder that in this life, spiritually, we all face an equivocal path, regarding our choices.