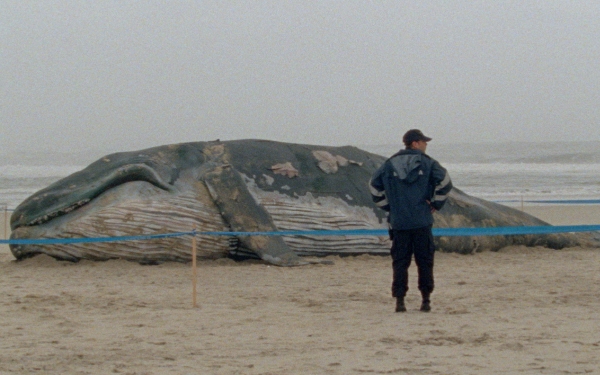 Miguel Gomes’ Arabian Nights (2015), a sprawling and oblique three-film treatise on the state of austerity-scarred Portugal defies review in many ways. Despite being exhibited in a triptych of separate volumes respectively subtitled – The Restless One, The Desolate One and The Enchanted One – it really only coalesces when considered as a single entire work. It’s as if you’re completing a jigsaw puzzle, unable to find any straight edges for the outside until you complete it and realise there weren’t supposed to be any. When the Langley Schools Music Project blasts over the image of Chico Chapas wandering along a quiet country road, Arabian Nights utterly transcends its constituent parts.

Vol. 1 may well set a few alarm bells ringing; an inconsistent duet of absurdist fable and national diagnosis, it struggles to find the right key. “I’m stupid and abstraction gives me vertigo,” claims one character and its a feeling with which audiences may empathise as Gomes swings from an ostensibly straight documentary style to surreal, bawdy myth. The individual tales meanings are obscured by wavering tone and formal gymnastics. The prologue features a film director unable to to justice to the truth of his country’s plight, so instead he flees and defers to the serene Scheherazade (Crista Afaiate). An apology from Gomes, perhaps. From here on in the line between fiction and reality is contorted.

Proffering a series of dreamlike twists on real-life stories collected from around Portugal over the course of a single year, he borrows the format of Scheherazade’s famous stories, but even within this structure his narratives ramble and diverge. Then again, so do the director’s intentions. His political commentary is esoteric despite a caption opening each of the three films that reminds of a “program of economic austerity” that is “devoid of social justice”. There is evident critique of the endemic poverty exacerbated by Portuguese institutions, and concurrently Gomes also focuses in on the way that people and culture elevate themselves regardless; the small miracles that “spring from the wishes and fears of men”. This sense is rendered especially poignantly in the tale that covers the majority of Vol. 3, The Inebriating Chorus of the Chaffinches, which documents men in impoverished urban communities raising the tiny birds for singing competitions. It’s perhaps this chapter of the overall piece that takes all of the faults and casts them in a new light; both ecstatic and humble. Arabian Nights may frustrate and enervate, but with hindsight these blemishes fade into a gleaming collage. Gomes has created something truly unique and remarkable; a rally cry against the powers that have choked the fire out of his country and a love song to those he sees rekindling the flame. Its constituent parts may not be perfect, but what a stunning whole.