Screening as part of November’s BFI Uncut Season at London’s Southbank, The Killing of Sister George (1968) follows the turbulent relationship that takes place between same sex lovers June Buckridge (Beryl Reid) and Childie (Susannah York), while the former is battling against her character being written out of a fictional television soap opera. American director Robert Aldrich’s controversial feature undeniably feels somewhat misplaced; had the film remained more faithful to the original Frank Marcus play, it may never have found its way into a season celebrating contentious cinema.

We delve into the life of June, who plays the popular role of Sister George in a mirthful BBC soap opera, but soon finds her life spiralling out of control when producer Mrs Mercy Croft (Coral Browne) tells her that her long-standing character is to be killed off. Disenchanted, June turns to drink and takes much of her problems out on her partner Childie, adding to an already disturbed relationship, where June is quite the dominating force, taking on a stern motherly role, whilst Childie revels in acting naïve and adolescent. 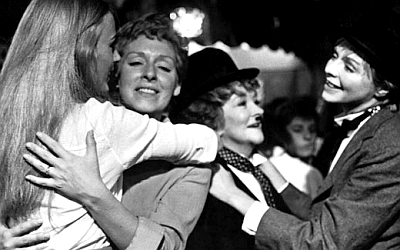 The Killing of Sister George doesn’t appear to have aged, as at the very core of this story is a cold, failing relationship between two people; a timeless love story that holds as much resonance today as ever, as does the blurring between the fantasy of the soap opera, and reality. Reid, reprieving her award-winning stage role, is outstanding, as she captures both sides to June; being both manipulative and facetious. Given she is older than Childie it could potentially make their relationship difficult to believe in, but thanks to Reid’s superb portrayal this isn’t an issue at all. She is mischievous, charming and comes fully equipped with a twinkle in her eye – thus, we can see exactly why Childie fell for her.

It’s easy to see why The Killing of Sister George flirted with controversy upon its release, but it does feel like too much of a contrived attempt to cause a stir. The crux of this story is a woman losing her job and identity. The fact she is a lesbian is almost irrelevant, and that’s why this is so wonderfully ahead of its time. Marcus wrote a story that takes an almost unmentionable subject, and places it within ordinary surroundings, thereby normalising it. However, Aldrich shifts the emphasis to the homosexuality, which is counter productive, while also sexualising the story, presenting Childie as a lustful object, swooning around in see-through nightdress. This is superfluous, as it’s a lot more effective when we use our imaginations – we don’t need to see them kiss to understand their relationship.

Comparisons to the original play aside, as a lone piece of cinema The Killing of Sister George is a timeless, masterfully performed piece. In fairness, it’s been more cleverly adapted than many other stage productions, as plays are naturally set over only a handful of scenes and settings and can look stilted on film, yet this expands its horizons intelligently. Although again, sometimes it’s what we don’t see, and often less can be more.