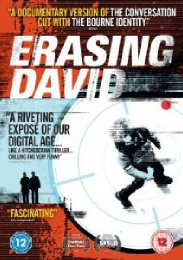 In Erasing David (2009), film maker Bond  (…David Bond) sets out to follow his 007 namesake into a hidden world where no-one knows his name or recognises his face. Leaving behind his wife, daughter and unborn child, David tests just how far the all-seeing eyes of the state can see and whether, in today’s day and age, it is actually possible to fall off the radar, as he attempts to disappear for an entire month.

His task sounds easy enough – all he has to do is drive off into the sunset and start afresh…but David soon realises his mission is going to be anything but simple. Followed by two ruthless investigators, our protagonist spirals into bouts of paranoia as he realises the complete lack of privacy surrounding his life. In his attempts to thwart the investigators’ endeavours, David must abandon all media outlets that have become part of everyday life. Foes to our privacy, such outlets have sneaked their way into our lives. Internet sites such as Facebook, various email servers and even Amazon all jeopardise David’s aim. As the hours tick painfully by, he becomes increasingly fretful of the watching world around him making for heart-thumping viewing. 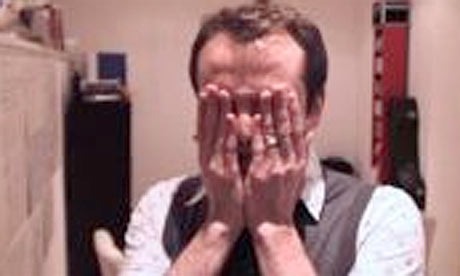 A documentary that packs a satirical punch, Erasing David offers a worrying glimpse at the ever-increasing loss of personal privacy. The film provides troubling statistics about the data held by thousands of different companies and governing bodies about every individual. The mere notion of freedom is inherently questioned by David’s findings, whilst the ridiculous conspiracies mentioned (such as Facebook being owned by the CIA) begin to look chillingly possible. He soon discovers that the invisible eyes that surround us have a huge impact on our actions and behaviour and this is only exacerbated by his experiment.

The countdown that follows his efforts throughout Erasing David not only marks his time away from the eyes of society, but also his path toward complete paranoia. The conclusions the film draws make for scarier viewing than most horrors and, although the chase scenes sometimes feel slightly staged (perhaps attributable to the advent of top-quality cameras being readily available giving documentaries a cinematic feel), it still makes for a hugely compelling film.

A worrying theme is highlighted in the research he presents, essentially revolving around the prospects of today’s children. The level of privacy they can expect is minimal and, through David’s daughter Ivy, the subject’s empathetic middleman of sorts, is only set to decrease. What the director begins to uncover is not only harrowing but also hits a little too close to home. The fact that David himself is such an average Joe reminds you how real the problems he identifies are.

After his experiences, the filmmaker ultimately concludes in the ugliness of the country he once loved. Whereas individuals could once expect to control the information made available about themselves, today people are just a few clicks away from knowing a whole host of information. Perhaps most impressively, Erasing David will make you think twice before logging into Facebook again.