Disappointment and regret loom large in Mike Leigh’s latest film, Another Year (2010). From the opening shots of Janet’s (Imelda Staunton) pained expression as she desperately tries to recall a happy moment from her past, you know Leigh will be revisiting familiar territory.

As with Leigh’s previous efforts, Another Year once again serves as a showcase for the very best in British acting. Staunton’s appearance may only be a cameo role, but you can see everything in her face: the anger, exasperation and despair that are fuelling her sleepless nights. 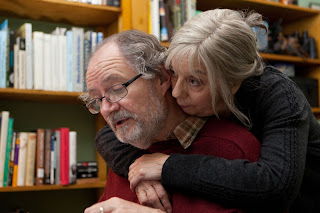 The film begins with Janet being gently interviewed by kindly counsellor Gerri (Ruth Sheen). Life is good for Gerri and her geologist husband Tom (Jim Broadbent), who share a happy marriage and a comfortable home. They also enjoy a good relationship with their genial thirty-year-old son Joe (Oliver Maltman), who is a housing caseworker. Vaguely reminiscent of Tom and Barbara from the classic 1970s TV sitcom The Good Life, they are “salt of the earth” type characters, who spend all their spare time in their allotment, growing and harvesting vegetables.

Gerri and Tom’s home is a magnet for their dysfunctional friends. Mary (Lesley Manville) works as a secretary in the same medical practice as Gerri. She is fifty-something, single, still slender and attractive and yet she has not come to terms with her middle-age, drinks to keep loneliness at bay, and flirts with younger men, desperate for a connection. These include Joe, with whom she becomes mildly obsessed.

Tom’s childhood friend Ken (Peter Wight) also drinks and smokes far too much but this manifests itself in his appearance – he looks a mess – overweight and sweaty and ready to keel over any minute. He is forever stuffing his face with crisps, fags or copious cans of beer.

Both Ken and Mary descend on Gerri and Tom for meals, barbecues and their companionship. In one poignant moment Ken bemoans how the pubs have changed in his home town – “Everything is for young people, shouting about nothing”. We realise that both he and Mary may well have missed the boat. When (a rather complacent) Gerri advises a distraught Mary towards the end of the film, “You have to take responsibility for your actions”, it is all the more heartbreaking because for Mary, so full of self-pity and despair, it may already be too late. 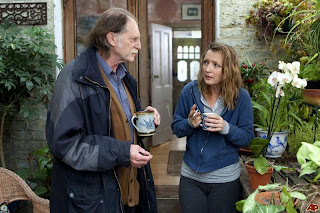 Leigh often develops his script and characters from his actors’ improvisation and this is much in evidence here, adding to the credibility of both. The story is divided into four chapters, one for each season. Mostly the camera just rolls, seamlessly capturing the mood and emotion of the film, but there are moments when Dick Pope’s assured cinematography comes to the fore.

The close-ups of Staunton’s character and later scenes of a pitifully small funeral, its chaotic aftermath and the furious grief of Tom’s nephew Carl (Martin Savage in another memorable cameo) are beautifully shot. There is also some wonderful attention to detail: Joe’s Amnesty mug; the Gabriel García Márquez novel that Gerri reads in bed; Ken’s tee-shirt (“Less thinking, more drinking”); and even the vast quantities of French table wine that they all consume.

Many of the scenes and episodes stay with you, so it is hard to pick out just a few but there is a poignant, existential moment when Mary realises that Gerri does not talk or think about her and the silence at the film’s end becomes quietly devastating.

Another Year is a magnificent film, and perhaps one of Leigh’s finest. Although caring, cheerful and kind individuals feature prominently, with much to laugh about, Another Year is really about the emotionally bruised amongst us, about regret, about envy, and the fact that life is often cruel.