When it came to co-writing his latest comedy, Due Date (2010), The Hangover (2009) director Todd Phillips took more than a few leaves out of Planes, Trains & Automobiles’ (1987) unblemished book. Perhaps Due Date is a loving homage to that John Hughes classic (which also happens to be one of my favourite films), but the similarities are definitely there in both storyline and protagonists.

The premise for Hughes’s movie follows Steve Martin having no choice but to enlist the services of John Candy’s uncouth travelling shower curtain ring salesman across America to get back home to his family for Thanksgiving. Where the two films differ, however, is that while Planes… had likable characters and a varied spectrum of jokes, Due Date features some pretty unlikeable people doing some pretty obnoxious things. It also has a tendency to dip far too much into overwrought sentimentality, grinding the supposedly fast paced plot to a total standstill.

Robert Downey Jr. stars as Peter Highman, an edgy father-to-be who bumps into Ethan Tremblay (the usually hilarious Zach Galifianakis) on a flight headed to Los Angeles, where his wife is due to give birth any day now. After an altercation before the flight takes off, Peter apprehensively hitches a ride with the wacky Ethan on a cross-country road trip to make it home in time for the birth of his first child. 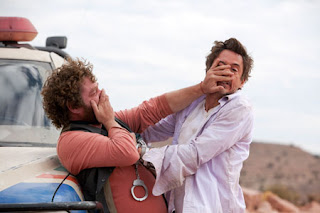 Todd Phillips is responsible for last year’s uproariously popular The Hangover, a brilliant R-rated comedy which succeeded in blending a mixture of watchable characters with a creative premise. Due Date on the other hand is a fairly unoriginal movie which exasperates any opportunities for comedy, with the end results being run of the mill and slightly contrived. The endless setbacks eventually become repetitive, over the top and exhausting, though the short 90 minute running time works in the films favour. The film’s strengths also lie in the strong screenplay, which mixes quick quips with some foul-mouthed sparring between the two leads, who share a natural chemistry.

Though not a bad film per se, Due Date suffers from a derivative, cliched narrative which leaves no comedic rock unturned and borrows far too frequently from the far superior Planes, Trains & Automobiles, a highly memorable film, whereas this sadly isn’t.