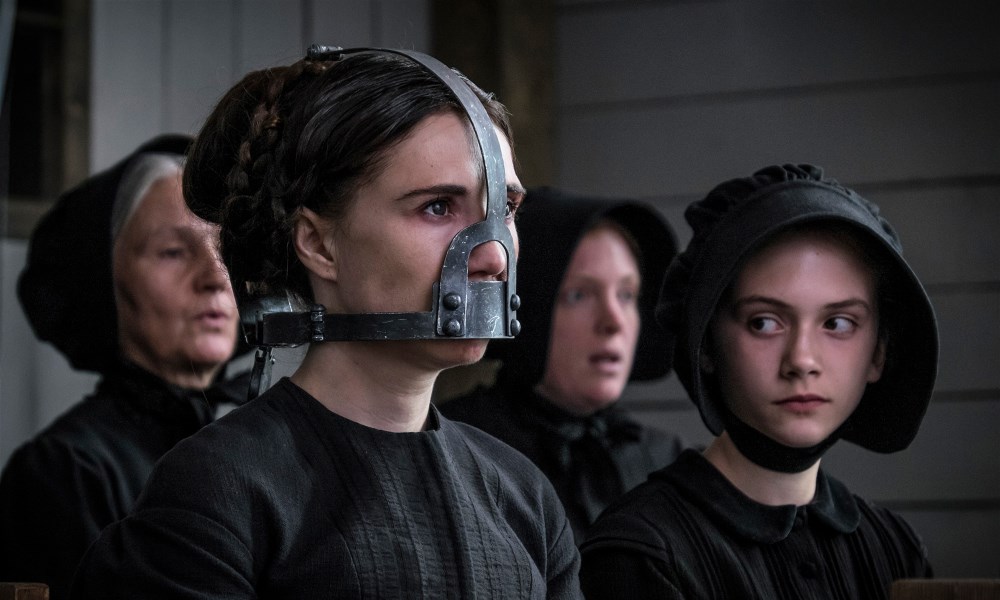 Set in the unforgiving American West at the end of the 19th century, Brimstone – the first English language film written and directed by Dutchman Martin Koolhoven – is a tale of one woman’s quest for survival and retribution.

Liz, superbly portrayed by Dakota Fanning, is a young woman whose life is spent on the run, pursued by a vengeful Preacher (the terrifyingly violent Guy Pearce). Liz’s determination to live, against the odds, marks her out as a woman to be controlled by men. With seemingly no escape from her constrained life, her muteness (she cannot speak) seems to represent the frustration of all women: unable to make demands for change, trapped into suffering silent oppression by a powerful male-controlled society.

At first appearances, it seems Brimstone is trying to be a feminist film. It’s exploring patriarchal structures in society and focusses on how women are forced into subservient positions, dominated by men. This is, in many cases, quite literal in the film: the Preacher demands total submission from women, especially sexually, and uses physical abuse and vicious punishment if they refuse. But this isn’t consensual BDSM: this is rape and violation, and it’s a clear hatred of women. Koolhoven tries to use these acts to signify the power of men in this society, in particular the cruel and evil Preacher, but instead of it being a critique, these scenes – of which there are many, and they are frequent – become a titillating tool.

Seeing one scene of sexual violence was enough to know how much the Preacher or another man hated women; seeing ten or more has an effect on how the viewer perceives the abuse the men enact. No longer shocking, it then becomes an indulgent male sadistic fantasy, delighting in violence against women. I was upset by the first rape scene and detested the Preacher; by the time the final one came around, I despised the director. These explicit, extended scenes, featuring close ups of the action, were totally unnecessary: using rape of women as a plot device is weak filmmaking, and quite frankly, it’s boring that male writers and directors are still doing this.

Koolhoven has said in interviews that he believes Brimstone has a “female point of view” and that “it’s the feminine perspective that stands out most of all”. This is laughable. Having a lead character who happens to be female doesn’t equate to the audience seeing her POV; if anything, we are just objectifying her. Saying that this view is somehow “feminine” (whatever that means) is a meaningless statement. The film is very clearly written and directed by a man, and the portrayals of sexual violence – directed solely towards women – are so obviously through a male gaze, not a female one. If a woman had written and directed this, I’d expect to see female characters anally violating men, and perhaps killing them when they were done, treating the men as similarly disposable, but no such equality of violence happens here. The women are subjected to constant violence and sexual violation by men, and after two-and-a-half hours of it, I was both exhausted and furious. This is not a feminist film; this doesn’t even come close.

What does work in the film is the slow, torturous sense of foreboding. There is no let up for Liz, as she tries over and over to escape her situation, and the growing suspense and fear are relentless. Pearce is deeply convincing as Preacher, the evil practically seeps out of his smile, every eye squint hints at further terrors to come; the malevolence is barely hidden in his brooding, haunting presence on screen. Both leads’ performances are outstanding, and cameos by Emilia Jones, Carice Van Houten, and Kit Harington, are all noteworthy too. The cinematography (Rogier Stoffers) and sound design (Herman Pieete) are also fantastic, and add to the vast discomforting landscapes that this Western thriller takes place in. It’s an ambitious piece, though indulgently long, but weakened by constant sexualising portrayals of violence against women, it ultimately fails.