Just so you know right off the bat, The Stoning of Soraya M. (2008) is not an Iranian version of Cheech & Chong’s Up in Smoke (1978), but if you occasionally enjoy the taste of a herbal cigarette and you are thinking of buying or renting this film, I recommend you procure yourself some “relief”, because it will be sorely needed. French reporter Friedoune (James Caviezel) breaks down on the outskirts of an unidentified dust bowl village in the depths of modern Iran. Whilst he is sipping tea and waiting for his car to be fixed he is approached by Zahra (Shohreh Aghdashloo) who is determined to tell him the tale of what happened to her niece Soraya (Mozhan Marno). 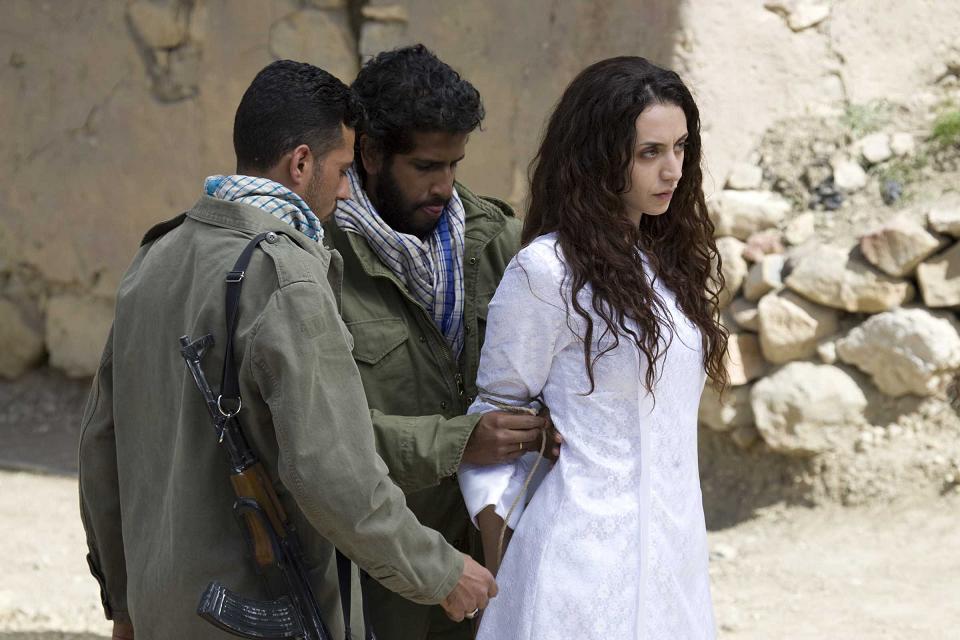 What follows is a flashback of the events leading up to the stoning. Soraya’s husband, Ali (Navid Negahban), is a violent pig of a man who wants to divorce her so he can move into the city with his two sons and marry a younger woman. Soraya refuses to let him take her children and leave her penniless, so Ali blackmails the corrupt local Mullah and between them they hatch a plot to get Soraya accused of adultery, a crime that according to Sharia law, can be punishable via death by stoning. Director Cyrus Nowrasteh, whose previous film The Path to 9/11 (2006) received critical acclaim, provides us with an authentic backdrop to this tale of woe. The village is a decaying, claustrophobic desert outpost full of oppressed women and thuggish men. And yet, even in the most harsh of situations, day-to-day domesticity continues almost obliviously.

The film suffers from pacing issues and the story is slow to reach its climax but for once, this might be intentional. As a viewer, I was both repelled by the idea of watching a stoning and yet nervously awaited the scene. I was obviously appalled that such a thing still happens in the 21st Century and, yet I realised about half way through the film that I wanted to observe the depiction of a woman getting stoned to death. However, this doesn’t make me a monster; on the contrary, it makes me a normal human being, because whether it’s rubbernecking at road traffic accidents on the M25 or taking a trip down to watch an aristocrat lose his head on the guillotine in 18th century France, humanity seems to be naturally fascinated by the macabre, and it’s this fascination which causes people to stand idle rather than intervene.

Just because you don’t throw a rock doesn’t mean you are not complicit in the murder and if that was what the director wanted to say I applaud his intelligence (and if he didn’t, then Nowrasteh got lucky). Yes, there are a few pantomime villains twitching their moustaches, and although Shohreh Aghdashloo is solid as Zahra, there are some moments of almost laughable over acting. However, The Stoning of Soraya M. remains an important piece of cinema. If you sit down expecting entertainment and chuckles then you are going to be disappointed, but if you want to be moved and enlightened then this is one film for you this week.