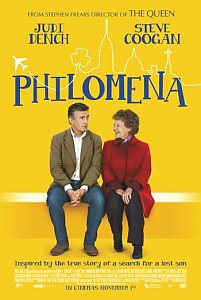 ★★☆☆☆
Hotly tipped as one of the UK film industry’s main contenders at next year’s Academy Awards, Stephen Frears’ Philomena (2013) certainly has its eyes on the prize when it comes to commercial marketability. In Judi Dench, Frears has a former Best Actress Oscar winner to test Cate Blanchett’s mettle, and in Steve Coogan a well-liked character actor for ample support. So it’s perhaps little wonder that Frears’ latest treads a fine line between crowd-pleaser and award-baiter. An impressive lead performance by Dench aside, Philomena in turn squanders much of its initial emotive power in favour of ‘odd couple’ lightheartedness.

Based on the true tale of Philomena Lee, we begin in 1950s Ireland as a young teen (Sophie Kennedy Clark) arrives at the convent of Roscrea after falling pregnant. Taken in as a “fallen woman”, Philomena gives birth to a healthy baby boy whom she is only permitted to see intermittently, until one day her son is whisked away by the nuns to America for adoption. Concealing her grief and shame for half a century, Philomena finally finds a ray of hope in the unlikely form of disgraced journalist and former civil servant Martin Sixsmith (Coogan), who consequently sets his sights on bouncing back with a weepy human interest story. Thus, the pair jet off to the States together to find Philomena’s lost little boy. 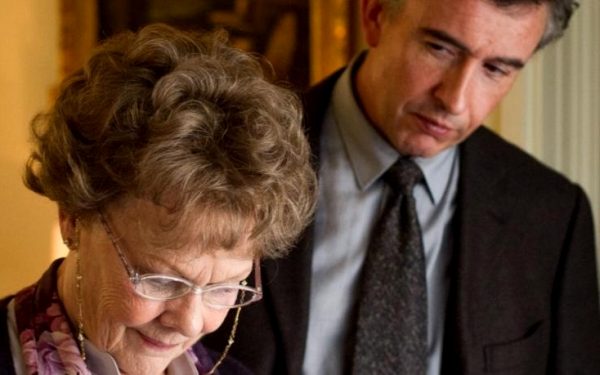 It’s interesting to see Coogan, a vocal activist against phone-hacking and numerous other shady press tactics take up the role of Sixsmith, who so famously resigned after becoming embroiled in a scandal over the burying of “bad news” during the coverage of 9/11. As Coogan (in full Sixsmith mode) quips in the film “if you spend your life shovelling shit, you’re bound to end up with some of it on your shoes. “Yes,” replies a former colleague, “but you managed to get it on your head.” However, after Martin meets Philomena and agrees to help her locate her child, we’re only occasionally led into questioning his motives via a few awkward phone calls with a hard-nosed editor (Michelle Fairley, here channelling Rebekah Brooks).

Frears’ directorial career is littered with meditations on the class divide, but with Philomena he appears somewhat compromised. Much of Sixsmith’s aloof derision (“You told four people today that they are all one-in-a-million. What are the chances of that?”) are batted away almost as soon as they’re uttered, glazed over by Lee’s all-forgiving, rustic ‘pleasantness’. As is the case with most hardline atheists, the one-time BBC man is also entirely dismissive of Philomena’s near-incorruptible faith. Such dichotomies are very much a staple ingredient of the mismatched heartwarmer (see Driving Miss Daisy or more recently The King’s Speech), but the experienced Frears is undoubtedly above this kind of ‘him ‘n’ her’, back and forth blandness.

Dench is undoubtedly Philomena’s shining light, pouring warmth and heart into the film’s remorse-racked heroine. Unfortunately, however, neither Coogan nor his script (co-written with Jeff Pope from Sixsmith’s own published account, The Lost Child of Philomena Lee) prove anything like her equals. Goodwill alone may well help Frears’ dramedy muddle its way through the pre-Oscars awards season and few would begrudge its leading lady several acting nods at the very least, but there’s little to propel this semi-maudlin melodrama above the chasing pack. For an altogether more affecting exploration of comparable issues, readers would be well-advised to seek out Peter Mullan’s excellent 2002 film The Magdalene Sisters.