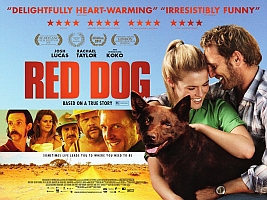 Kriv Stenders’s Red Dog (2011), an adaptation of the Louis de Bernières novel and starring Josh Lucas and Rachael Taylor, is based on the true story of a stray, red Kelpie who – in the 1970s – gained legendary status in the Australian outback.

The film opens with trucker Thomas (Luke Ford) arriving in the remote mining town of Dampier, western Australia, to find the Mermaid hotel deserted. Members of the local community are in the backroom of the hotel bar watching over a red dog who has accidentally eaten poison. Gradually, the bar fills up with various oddball characters, mainly men, who have come from all over the world to work in Hamersley Iron’s mining operations. They all have a story to tell about how ‘Red Dog’ has touched their lives, and are keen to share their experiences with the stranger. But the dog’s one true master, American traveller John Grant (Lucas), a bus driver for Hamersley Iron, is absent.

As the film unfolds, we learn of the love affair between John and local secretary Nancy (Taylor) and their special relationship with Red Dog. It’s at this point, that Daniel Taplitz’s screenplay begins to shamelessly tug on our heartstrings. 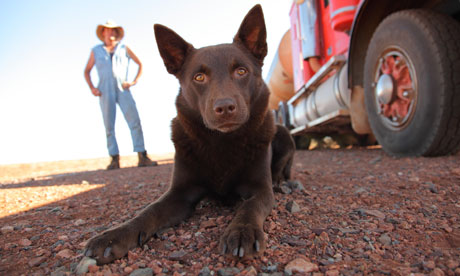 Red Dog’s unapologetic, manipulative approach, some ramped-up Australian humour and the film’s episodic structure does, at times, make you feel as though you’re watching a series of advertisements. This may be explained by the fact that the producer, Nelson Woss, took the unusual step of funding his film via western Australian companies involved in the mining industry and larger corporate companies like Pedigree dog food. These flaws are balanced, however, by some terrific performances (Koko, the red dog, and a cameo from ‘red cat’ are up there with the two-legged cast) and Geoffrey Hall’s superb cinematography.

Hall’s framing of the Australian outback’s vast expanses of red earth provides a vivid contrast to the interior shots of the ramshackle Mermaid Hotel and the miners’ squalid working conditions. The production design is full of impressive detail, such as the cramped living quarters, the period trucks and caravans and 70s costumes.

Despite reservations, Red Dog is a rewarding viewing experience. Stenders skilfully negotiates the inevitable pathos with some well-timed humour and the end result is an involving and entertaining tale about a canine superstar (reminiscent of Lassie and/or Rin Tin Tin), who helped to establish a sense of community. A bronze statue of Red Dog is erected in the film’s closing moments – it adorns the entrance to Dampier to this day.