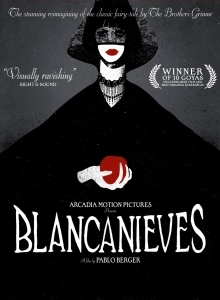 Blancanieves (2012), the new film from Spanish writer-director Pablo Berger, is rooted in the cinema of old. It’s both a rude adaptation of a classic fairytale, Snow White, and a return to the postmodern glamour of silent film. Like Michel Hazanavicius’ Oscar-winning The Artist (2011) and Michel Gomes’ Tabu (2012), Berger has been drawn to the obscure purity of monochrome images, boxed ratios, overloaded gestures and silent film cards. Blancanieves is a nostalgic tribute to the lost innocence of early cinema, longing to recapture that magical sense of discovery and enchantment in a ruthlessly cynical age. 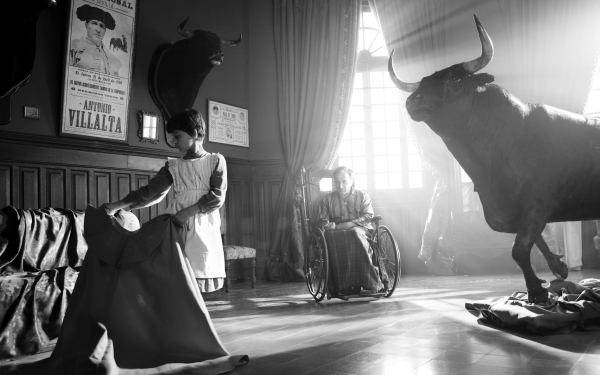 Set in Seville during the 1920s, the golden era of silent film, the film centres around another lost showpiece, bullfighting, and a dark eyed young girl called Carmencita (played first by Sofia Oria). The daughter of a noble matador (Daniel Giménez Cacho) and flamenco dancer (Inma Cuesta), when her mother dies in childbirth, her father is cuckolded by evil stepmother Encarno (Maribel Verdú). Carmen copes with the companionship of an impish rooster named Pepe, Blancanieves’ answer to the scrappy terrier in The Artist, until she grows up (into Macarena Garcìa) and befriends a troupe of seven dwarf bullfighters, with appropriately sized bulls, and encounters the rest of the Snow White tale, as Berger imagines it.

Rather than becoming the dwarfs’ housekeeper, in a feminist twist, she becomes the main attraction in their travelling show. One unnamed dwarf – let’s call him Jealousy – is a male nemesis to balance out Encarna, whose magic mirror is replaced by a gossip magazine. The camera swoops through this kinky retelling like a pass from a bullfighter’s muleta, whilst Alfonso de Vilallonga’s flamenco music upholds the momentum. This is most impressively displayed in the penultimate bullfighting scene in which Berger combines Balàzsian close-ups with inventive sound design and flickbook-like montage in the style of Sergei Eisenstein.

Although Blancanieves mimicry of silent film aesthetics is what makes it remarkable, it also accounts for its shortcomings, because the film does not establish a stable emotional identity of its own amidst its frequent and loving allusions to that era. Berger is the grinning prince planting a kiss on his very own Snow White but this fairy tale will not end happily ever after. The recent rediscovery of silent film is unfortunately more of a casual awakening than a complete rebirth, although Blancanieves may be the finest example of it yet.