Charming, witty, and quintessentially quirky, Cyrus (2010) is a slice of well-worked comedy from plucky lo-fi indie brothers, Jay and Mark Duplass. John C. Reilly plays John, a divorced down-and-out schlub who meanders through life alone and somewhat desperate. Upon the persistent demands from his ex-wife/best-friend (Catherine Keener) to shape-up and move on with his life he agrees to attend a local party. At the party he gets drunk and systematically tries to hit on women, severely embarrassing himself in the process. 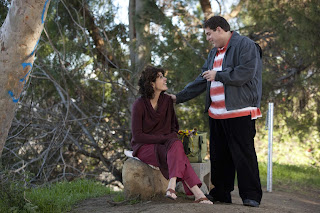 As the alcohol flows so does his bladder and he retreats to a quiet area of the garden to escape the crowds and relieve himself. “Nice penis”, Molly (Marisa Tomei) taunts as she catches John in the act, the foxy singleton immediately striking up conversation with the embarrassed and now very drunk John.

From this initial fortuitous meeting the pair hit it off and a flourishing relationship seems set in stone. But there’s always a catch, and John has yet to meet Molly’s twenty something son, Cyrus (Jonah Hill), whose disturbing oedipal intimacy with his mother leads to a number of excruciatingly awkward scenarios that prevent John from fulfilling his romantic destiny.

Previously known for their Sundance hits The Puffy Chair (2005) and Baghead (2008), Cyrus brings the Duplass brothers into the mainstream with a smart and extremely funny romantic comedy. From the opening scene, in which John is caught in the middle of a compromising act by his ex-wife (played intelligently with an aura of honesty by go to indie girl Keener), the audience knows they are in for a string of universally uncomfortable scenarios. Yes, such situations have all been done before on film but Cyrus is devoid of cliche and instead, with its ingenious improvisational approach in hand, offers an engaging and absurdly wonderful take on the rom com genre.

What’s intriguing about Cyrus is it’s observational stance to social discomfort, much in the same-vein as an episode of Larry David’s brilliantly conceived Curb Your Enthusiasm, amusing and unnerving in equal measures. A long and unrelenting scene of comic enjoyment comes when a heavily drunk John performs a karaoke version of The Human League’s synth pop classic Don’t You Want Me Baby at the opening party – a sequence which is unashamedly awkward but nevertheless leaves the viewer posing with a wry smile of empathetic embarrassment. 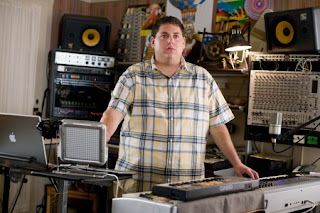 All these scenarios are undoubtedly well directed, but more in the sense of the less-is-more refined approach – knowing when and where to leave the camera to capture the actors at work. Indeed, the majority of the film’s praise should be shared in equal parts by Reilly, Tomei and Hill – each of their character’s perfectly offsetting one another with thoughtful, nuanced performances; Reilly finely tunes the hapless divorce role, Tomei plays warm and friendly as well as anyone and Hill, with his dead-pan stare and sad-sack posture really brings a delightful edge to his role (who can forget his “weird” musical performance to John at the first meeting?).

Although this is by no means the most aesthetically pleasing film you may come across, its measured approach of sincerity and sensitivity mixed in moments of delightful awkwardness is something to truly cherish. A Hollywood debut for the directorial duo, Cyrus – in more ways than one – has brought the Duplasses to the masses.