Chul-soo Yang’s Bedevilled (2010) is a slow burning South Korean psychological thriller that hits hard at the end, which is the reason why it wouldn’t be categorised as a film for the faint hearted. In fact, it is somewhat difficult to categorise it in a genre altogether. It would probably be wrong to call it a horror, a drama or a revenge film although it has elements of all three. It is, in the end, a film concerning human nature driven to extremities.

Hae-won (Seong-won Ji) is a young middle class woman with sociopathic tendencies. Cold and distant, she seems to avoid any type of personal involvement, which affects her life in all its aspects. She refuses to identify the authors of a rape, denies any help to a desperate elderly customer at work and slaps one of her colleagues – as a result of which she is forcefully sent on holiday by her boss. She decides to go on holiday where her grandfather used to live – on the remote island of Moo-don – where a small community lives.

Hae-won is greeted by her childhood friend Kim Bok-nam (Yeong-hie Seo) with almost childish enthusiasm and seems to step on a floating paradise of relaxation. She soon finds out that appearances can be deceiving and her paradise turns into a nightmare as the community reveals its twisted and sick power relationships and degrading structure. 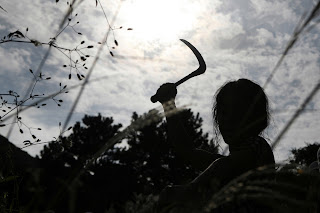 Bok-nam is at the bottom of the hierarchy and is abused by her oppressive mother-in-law (supported unconditionally by a choir of elderly relatives) as well as by her ruthless husband and his disabled brother. Matriarchy and patriarchy support each other in this society and being the only young woman, Bok-nam is regarded as a free source of labour and sex by the other members. She often has to hear her husband have sex with prostitutes or take cruel beatings from him as the mother in law urges her to be grateful to him, her motto being ‘A woman is only truly happy when she’s got a dick in her mouth’.

Although Bedevilled may cause frustration in the less patient, the story is constructed purposefully for maximum impact. The slow pace allows the main characters to develop while the supporting characters drive them into the explosive climax. There are two kinds of victims here: Bok-nam – the abused – and Hae-won, who walks into a family drama which ends up enveloping her as well.

Yeong-hie Seo does an absolutely brilliant job at portraying the tortured Bok-nam without making it in any way pathetic. Her performance gives life to the character and makes it authentic in both its instances: that of the victim as well as that of the killer. The film’s imagery is also highly impressive, perhaps a direct result of director Chul-soo Yang’s experience of working with Ki-duk Kim.

If there is one particular drawback of Bedevilled then it is the fact that the ending is dragged out for a considerable while – almost clumsily so – as there are many points where the film could (and should) have ended. However, the narrative’s eventual finale re-establishes why we sympathised with certain characters and brings back a drop of sanity into the two main characters, whilst also leaving a strangely optimistic sense of closure.