British filmmaker Robert Heath returns to screens with Truth or Dare (2012), a low-budget horror that attempts to put a generic spin on the well-known party game of the same name. The film follows five university friends – Paul (Liam Boyle), Chris (Jack Gordon), Luke (Alexander Vlahos), Eleanor (Jennie Jacques) and Gemma (Florence Hall) – as they celebrate the end of term with a drug-fuelled party. Their antics, however, come at the expense and total humiliation of fellow student Felix (Tom Kane), who’s always been somewhat of an outsider.

Six months later, the five friends are invited to what’s described as the ‘party of the year’ at a secluded wooden house, located deep in a forest. Upon arrival, the group are welcomed by Felix’s older brother Justin (David Oakes), who claims that his younger sibling has been held up in Chile (!?). However, as stories of Felix’s whereabouts slowly unravel, the teens are forced to partake in a twisted, life-or-death game of truth or dare – far from the type of party that was promised. 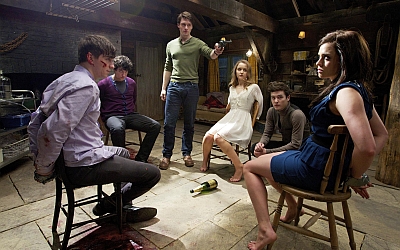 Sadly, whatever authenticity Truth or Dare exhibits in its premise or satisfactory opening is tragically short-lived. Screenwriter Matthew McGuchan, previously responsible for 2003’s little-known LD 50 Lethal Dose, quickly allows Truth or Dare to succumb to a disappointing state of predictability, compete with stereotypical teen characters (the jock, the nerd, the ex-soldier etc.) and other well-worn horror clichés. It’s not even like the truth or dare element is bold either, as the ‘dares’ Justin disperses are the same every time. This results in a gimmick that’s far too tame to evoke any kind of anxiety or amplified tension.

Heath’s direction is equally lacking in stability. Not only are most of his camera tricks more pornographic than they are startling, but his skills are somewhat dubious when you consider that most of what he attempts is clearly ripped-off from other horror films. Thankfully, the cast fair slightly better, particularly Oakes, whose muscular and overpowering frame helps Justin have the physical presence needed to make his bold claims and violent tendencies seem justified and believable.

Ending on a relative high thanks to a better-than-expected conclusion, there’s still not really enough on show to warrant the existence of Truth or Dare especially in an age when audiences are proving more and more resilient to conventional horror. It does make you stop and ponder what could perhaps have been achieved elsewhere, had the resources and finances been awarded to a director with a little more experience. Everyone deserves their turn, but you’ll be left praying for more daring generic subversion in Heath’s next outing.