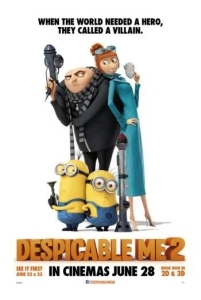 Despicable Me (2010) was the first offering from Universal Pictures off-shoot Illumination Entertainment, and it’s financial success proved that Pixar and Dreamworks can be beaten at their own game. Unfortunately, their bunny-based follow-up Hop (2011) was riddled with myxomatosis, whilst the environmentally-conscious The Lorax (2012) was an ecological disaster as far as critics were concerned. Thankfully, Pierre Coffin and Chris Renaud’s Despicable Me 2 (2013) is a slick, inventive and thoroughly entertaining slice of animated nonsense that will enthral kids, amuse adults and rule at the box office. 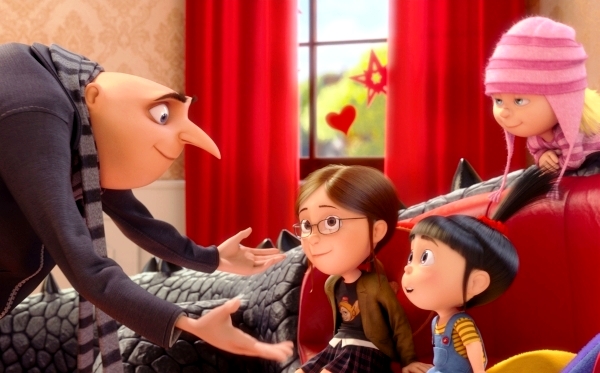 This time round, not-so-evil supervillain Gru (Steve Carell) is officially retired and spends his days caring for his beloved adopted kids and experimenting with jam recipes (naturally). His peaceful existence is shattered, however, when he is recruited by future love interest Lucy Wilde (Kirsten Wiig) and spy master Silas Ramsbottom (Steve Coogan) to join the infamous Anti-Villain League and track down the ringleader behind the heist of a mysterious serum. Gru’s number one suspect is restaurant owner Eduardo (Benjamin Bratt), a dead ringer for his former partner in crime El Macho who was last seen riding a shark strapped with dynamite (how à la mode) into the gaping chasm of a volcano twenty years previously.

Gru is one of the highlights of Carell’s somewhat patchy career thus far, and although he’s still very much the main character here, he’s again outshone by his little yellow minions – who must be the stuff of merchandisers dreams. They are given a much more prominent role in the sequel, and whether it’s their pastiche of Charles Ebbet’s famous ‘Lunch atop a Skyscraper’ photograph or the inevitable Alien (1979) parody, practically every time they’re on screen they inspire laughter. Wiig is fine as Wilde, though she does seems to be channelling Jennifer Aniston, whilst Bratt’s Eduardo (who was to be voiced by Al Pacino) is a fun, if not very villainous villain.

There is a ten-minute lull midway through this feisty sequel and the necessity of the film’s 3D conversion is as debatable as ever (though the patented short minion film over the end credits remains impressive and proves that three dimensions can sometimes be better than two). Yet, despite a few dropped balls, Despicable Me 2 is silly but superlative family entertainment. With enough sugar in your system and an open mind, there’s plenty on offer for both young and old.