Detailing the life of Belfast’s Godfather of Punk, Terri Hooley (played with a compelling level of emotion by Richard Dormer), Lisa Barros D’Sa and Glenn Leyburn’s Good Vibrations (2012) is the story of a man with a very special dream. Hooley, amidst the chaos and confusion of the Northern Irish Troubles, decides that the answer to Belfast’s woes is to open a record shop which he named ‘Good Vibrations’. Despite the problems of protection rackets, daily riots and roadblocks, the shop went on to birth its own label, consequently representing John Peel favourite The Undertones – who gave us the tune to many an adolescence, Teenage Kicks.

From his early childhood, Hooley was a man who didn’t care whether you were Protestant or Catholic – it was all about the music. Terri’s problem however, is that it literally is all about the music and, of course, himself. This wears on his family life and finances as he pursues his dream to bring music to the people. What Good Vibrations brings to the Troubles is a lighter touch, providing a fresh take on familiar issues. In many ways, the historical aspect falls into the background, presenting instead a story of a man obsessed with the punk scene (and himself). This leads to a tremendous fallout surrounding his personal life where, as hard a Terri might try, he still ends up hurting those who love him the most. 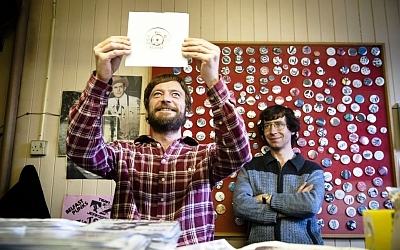 Hooley’s long-suffering wife Ruth (Jodie Whittaker) convincingly portrays a woman who has to fall into the background as Terri puts the music first, even before his newborn child. The family drama and tales of Hooley’s life are peppered with some great small narratives, from bringing together rival sides of Belfast by giving them LPs and talking about the music, to him trawling around London desperately trying to convince A&R bods that he has discovered the new sound of punk.

Whilst Good Vibrations entertains, there are elements of weakness where the plot drags in pace and not enough space is given to secondary characters (particularly the enjoyably jaded and drunken performance from Dylan Moran) that would have presented a more rounded picture of Hooley. Nevertheless, it’s an interesting move by first-time writers Glenn Patterson and Colin Carberry to pen the biopic of a man who is still alive, and still manage to create an honest, at times brutal, portrayal of Hooley.

Much like the meandering history of the actual Good Vibrations shop, which has opened and closed with alarming regularity, D’Sa and Leyburn’s Good Vibrations has its peaks and troughs in quality. Yet overall the feel, the music and the spirit of the biopic is a fresh take on Northern Ireland’s recent tumultuous past, charting the life of a man possessed with the spirit of punk.