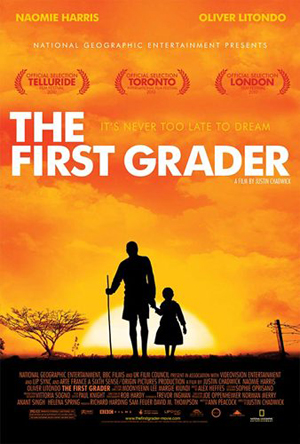 Appearing very much at the tail-end of this year’s BFI London Film Festival, The First Grader (2010) has been somewhat underplayed among its brother and sister entries this year. Following his feature debut The Other Boleyn Girl (2008), director Justin Chadwick fast forwards to the 21st century for his latest film, which retells the life story of the world’s oldest ever primary school student, Kimane N’gan’ga Maruge (Oliver Litondo).

A feel-good story with many timely morals, The First Grader is a confluence of two time lines, the first set in 2004. Following the government announcement that education – for the first time in Kenyan history – is to be made ‘free for all’, eighty-four year old Maruge makes the bold decision, in defiance of his age, to win the education he has been erstwhile denied by showing up on the first day of term at the local primary school. Not all that glistens is gold, though, as Maruge is to find. When the media get wind of the story, the animosity stirred up among local parents and government ministers – who see it as an abuse of the new system – leaves him and the school’s headmistress Jane Obinchu (Naomie Harris) fighting for his seat in the classroom. The second, running parallel to this core plot-line, is Maruge’s own back-story – told through a series of flashbacks – which reveals his troubled and tragic past as an imprisoned Mau Mau rebel.

As an English born film maker, Chadwick is one of those aforementioned with a burden of authenticity to shoulder. To his credit, he appears to be have been well aware of this in creating The First Grader and took a number of steps to ensure the integrity of the finished film. First-off is his choice of location, demanding that the picture actually be filmed in Kenya, where the actual true story unfolded – not South Africa as had been widely rumoured – and secondly is his decision to use a real Kenyan school and its pupils as the principle set and extras. 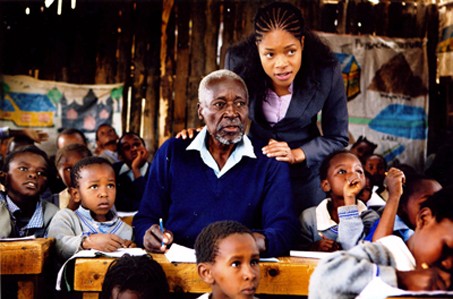 In a part of the world unfamiliar with television – never mind cinema – filming in a Kenyan school was a big gamble. However, by turning much of the filming into a game for the children, Chadwick displayed a remarkable resourcefulness in capturing their individual performances, many of which – including dialogue – occurred spontaneously during takes. This, combined with both Litondo and Harris’ notable performances, Rob Hardy’s graceful cinematography and the excellent musical direction creates an incredibly polished final product.

What you might be surprised to find, though, is that this is all a bit of a swizz. In Chadwick’s vision of Kimane Maruge’s story, he is keen for his audience to identify with the protagonist, creating a narrative which is, in isolation, quite moving. The director brings us a lonely and misunderstood old man; haunted by a tragic past and clinging to the memories of better days he fashions quite a compelling character that an audience will undoubtedly warm to. This all seems quite reasonable until you read about the real Kimane Maruge and notice the startling omission of the fact that he was actually great-grandfather to some thirty or more children – two of whom actually attended the same primary school as him.

Realising this after the film actually left me with something of a bitter taste in my mouth. It seemed quite a deliberate omission not to make mention of Murage’s large family, and rather paint him as a forlorn old man trapped in a tired cycle of love, loss and redemption – imagine a less subtle Carl Friedrickson from Disney Pixar’s Up (2009). I was ready to give this film four stars; it genuinely moved me. I was happy to forgive certain clichés, reminding myself that, after all, even the commonest clichés do actually occur outside the silver screen from time to time and that such things shouldn’t be considered clichéd if they are a real person’s story; a real person’s tragedies and triumphs. I came back down to earth with a bump reading relevant news items on Murage and it reminded me acutely why I’m so often such a cynic.

Viewed as a story “inspired” by real events, The First Grader is riddled with heavy-handed clichés that will patronise any discerning viewer. From a technical standpoint it’s much more impressive, with good pace, great music and fine acting. My ultimate feeling, though, is that the crucial authenticity that Chadwick so painstakingly wrought in his locations and filmmaking approach is completely undermined in the overly-sentimental – frankly dishonest – characterization of his protagonist, whose portrayal never really loses sight of the western audience it was intended for.