Based on the hit stage show of the same name, Rock of Ages (2012) is a blast from the past in the best sense of the word. After the wholesome plastic pop of the High School Musical franchise and repetitive tedium of TV’s Glee, Hairspray (2007) director Adam Shankman’s trip back to the days of sweaty bars, hard liquor and overt sexuality is the amphetamine injection the tired musical genre has been crying out for.

After leaving her backwater home town, aspiring singer Sherrie Christian (Julianne Hough) travels to Hollywood with dreams of becoming a star. After being robbed on arrival, she is befriended by handsome bartender Drew Boley (Diego Bonta), who gets her a job at the Bourbon Room owned by grizzled rock promoter Dennis Dupree (Alec Baldwin). Drew and Sherrie inevitably get the hots for each other and the main thread of the film is based around their relationship, but it’s the sideshows that provide the real sparkle. Uptight Mayoress Patricia Whitmore (Catherine Zeta-Jones) campaigns to shut down the Bourbon Room due to its corrupting influence on the community, whilst strung-out rock star Stacee Jaxx (Tom Cruise) is struggling to maintain a grip on reality after years of rock and roll excess. 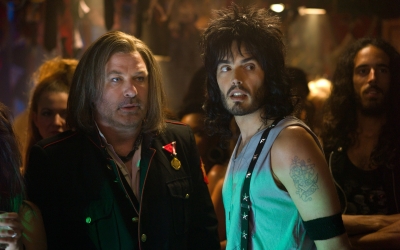 Rock of Ages’ plot is evidently pretty thin and you’re never in doubt that love will conqueror all, but the film’s adult themes, diluted as they are compared to the stage production, are wonderfully refreshing and reminiscent of the likes of Grease (1977) and Dirty Dancing (1987). It’s always the soundtrack that makes a good musical however, and the 1980s (and some early 90s) classic rock numbers are well chosen and in the most part, very well performed. In a recent screening, it’s rumoured that an audience of sour-faced film critics were seen head-banging and whooping with joy – as good a sign as any that Shankman has put on a good show.

As for the talent, Bonta might be a bit drippy for some tastes but both him and Hough are perfectly acceptable as the lead lovers. The rest of the cast are all on form, but there are undeniably two stand-out performance. Zeta-Jones is brilliant as the maniacal puritan with a seedy past, whilst Cruise’s Jaxx is undoubtedly the highlight of the piece. Cruise plays the role to perfection, exuding a dangerous masculinity that may well confuse those out there who had him pegged as a sexless ‘pretty boy’.

There are a few negatives. Shankman’s rock opera is maybe 10-15 minutes too long and Mary J. Blige’s underwritten strip club owner is shoe-horned into the action for speculative reasons. Despite such small niggles, Rock of Ages is about as much fun as you can have in a multiplex cinema with your pants on. Word of mouth alone should guarantee it becomes one of the surprise hits of the summer, weather permitting.