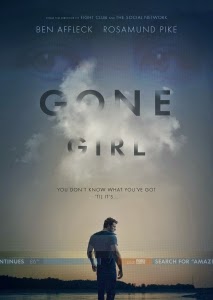 ★★★☆☆
David Fincher knew exactly what he was getting himself into when he agreed to take on the big-screen adaptation of Gillian Flynn′s bestselling Gone Girl. Like 2011’s The Girl with the Dragon Tattoo (also based on a popular page-turner), Gone Girl (2014) attempts to marry the innately pulpy sensibilities of its source material with its director’s calculated, meticulous approach to storytelling. While devoted fans of the book will likely come away pleased with what they see here, there is a sense that Fincher is a filmmaker somewhat in stasis, content with shooting ever-so edgy holiday reads as his passion projects fall by the wayside. Though some artfulness is dredged up amongst the trash, there’s plenty to perturb and perplex. 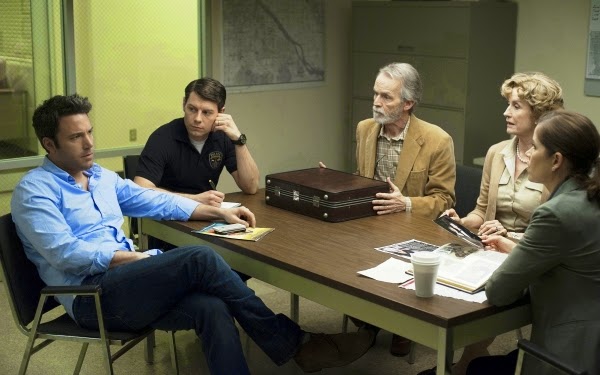 Ben Affleck and a never better Rosamund Pike play Nick and Amy, the dysfunctional married couple at the heart of the film who have fallen on hard times since losing their respective jobs as writers in New York. Moving back to Nick’s hometown in Missouri to look after his cancer-afflicted mother (who passes away shortly after), the pair drift apart as Nick becomes disinterested and Amy’s apparent longing for a child is rebuffed time and time again. However, when Amy goes missing one morning amidst signs of a struggle at home (a smashed glass table-top, a streak of her type O blood on a wooden overhang), the suspicions of local detective Rhonda Boney (Kim Dickens) are piqued. Why are their none of the other tell-tale indicators consistent with a home invasion? And why does Nick know so little about his ‘Amazing Amy’.

As part of their fifth wedding anniversary, Amy has conveniently littered a series of clues around town for Nick to follow to his beloved, which now form an integral part of the investigation. Quickly transformed from victim to villain under the intense scrutiny of the surrounding media circus, Nick is backed into enlisting the aid of pricey defence lawyer Tanner Bolt (Tyler Perry) – introduced as the “patron saint of wife-killers” by one Fox News-style anchor – as the accusations mount. It’s difficult to regale much more of Gone Girl’s tricksy narrative without stumbling into spoiler territory (now a cardinal sin), suffice to say that Amy proves an adept at incriminating her ‘abusive’ Missourian husband beyond the grave. Though Pike excels as the “cool girl” wife gone, well, gone, it’s Affleck who actually comes away as top performer. Handpicked by Fincher for his past ability to rise above widespread criticism (remember the Gigi remake?), he’s almost too ideal as the put-upon murder suspect charged with charming his way back from the brink towards public redemption – one winning smile at a time.

Yet, despite a roster of fine turns, Gone Girl is hamstrung by its understandable faithfulness to Flynn’s commuter favourite. What begins as an interesting, layered portrayal of a soured marriage underscored by a bubbling passive aggressiveness, several major plot twists rinse out those finer nuances to leave behind a bleached, cold and entirely unambiguous new equilibrium. Fincher’s latest is perhaps most comparable to 1997’s The Game in terms of its embracing of both artifice, role-play and, knowingly or otherwise, outright silliness. Humour helps to cover the majority of cracks, but Gone Girl is certainly guilty of taking its surgical evisceration of monogamy too seriously at times. Its findings are also hardly revelatory – married life can be monstrous – and its skewed gender politics deserve greater, more in-depth scrutiny than this review can permit. To his credit, Fincher leads a merry chase for Pike’s eloquent enigma, but leaves precious little left to our own imagination.