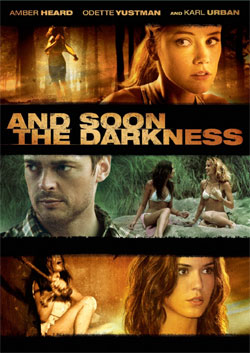 Horror has always been a genre that has produced films into which no time or effort has been put. Cinema history is riddled with horror flicks that were turned out in a matter of months, for as little money as possible, hoping to make an even profit on the video and DVD releases. And Soon The Darkness (2011) appears to fall into this category.

The story surrounds two travelling friends, Stephanie and Ellie, who stop over in a remote part of Argentina while on a cycling trip. While there, they have a very by-the-numbers night out and end up missing the bus, which would have taken them on the next leg of their journey. So, they laze about by a river, have an argument, get split up and then Ellie is abducted by an unknown assailant. It’s now up to Stephanie and the mysterious Michael to try and save her.

That ‘plot’ (or lack thereof) took me all of a few lines to describe. Even the press notes – which go into further detail – explain it in less than than the average DVD jacket synopsis. However, the film-makers felt that this part of the story needed a whopping 45 minutes to tell. And Soon The Darkness is only 91 minutes long and it spends nearly half of its running time setting up the plot. And my God is it boring.

These 45 minutes drag due to the horrible, uninspired dialogue, terrible clichéd scenes and both Stephanie and Ellie being ghastly characters with no personality, originality or class. I know the horror genre is hardly known for their hard-hitting character development – but at least one of them should have been likeable. 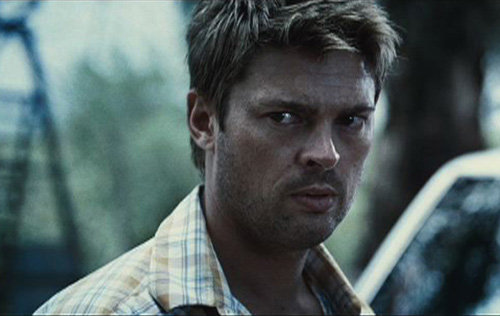 However, I don’t blame either of the film’s leads; both Odette Yustman and Amber Heard are no stranger to the genre and are perfectly acceptable actors. I actually put the blame on feature film debutant, Marcus Efron, who appears to have no clue when it comes to pacing, framing or direction. He conforms horribly to the leery aspect of the horror genre by filming the two female leads with an almost pornographic sensibility which, in 2011, is boring, amateurish and above all, childish.

On top of this, Efron fails to keep the audience on their toes. And Soon The Darkness is meant to be a ‘horror-thriller’, only he doesn’t capture any aspect of either genre: it’s is not scary, nor is it tense. Despite attempts to add a level of threat, the protagonists never seem in any apparent danger. The film just plods along at an incredibly tedious pace and meanders towards to a conclusion that doesn’t deliver any sort of satisfaction. I mean, if you can’t get a half decent performance from Amber Heard in a horror film, you’ve got some problems.

It’s been a while since I’ve been able to dub an actress a “scream queen”, but Amber Heard is throwing out some impressive work within the genre. From her start in All The Boys Love Mandy Lane (2006), through The Stepfather (2009), Zombieland (2009) and more recently John Carpenter’s The Ward (2010) to acting alongside Nicolas Cage in Drive Angry (2011), Amber Heard could genuinely be the first true 21st century Scream Queen. However, despite being the best thing in And Soon The Darkness, this is not the strongest entry on her CV.

And Soon The Darkness is dull, slow and completely by-the-numbers. It takes far too long to set the plot up and when it does, it fails to deliver; a completely missable affair with nothing going for it. This may have been made for cheap, so they can recuperate the money on the DVD market, but it hardly deserves to do so. As fans of this genre, we should stand up and say: enough is enough. Start putting some more time, effort and originality into these films before you lose us all.