Adapted from the Joe Dunthorne book of the same name, Submarine (2011) is the maiden voyage of writer, actor and director Richard Ayoade into the deep and murky waters of British cinema. Perhaps best know for his role as Maurice Moss in the long running Channel 4 sitcom The IT Crowd, Ayoade has actually enjoyed a prolific television career behind the camera as well, writing and directing a number of cult television shows like Garth Merenghi’s Dark Place and its subsequent spin-off Man to Man with Dean Lerner.

Submarine marks Ayoade’s transition from the small screen to the big and few could boast such an impressive debut. Carved with fantastic care and attention, Submarine is the deeply intimate and uncomfortably frank story of fifteen-year-old school boy Oliver Tate (Craig Roberts). Set in mid-1980s against the damp backdrop of the Welsh coast, young Tate must struggle through his fifteenth year as he attempts to revive his parents failing marriage, loose his virginity and comfort his new girlfriend through painful family difficulties. 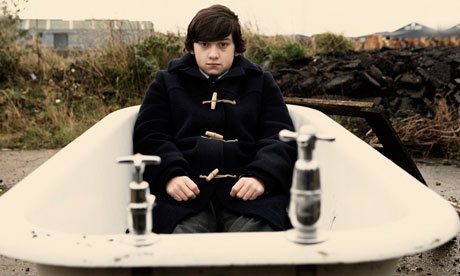 While the story might not sound like anything new, it doesn’t intend to be. The true focus of Ayoade’s lens is the characters, particularly Tate. Submarine is a deeply personal character study, probing delicately between the seams as it undresses the mundane events which will indelibly shape the people we become. From school bullies to first kisses; family separation to the loss of loved ones, Ayoade explores the difficult cocktail of emotions we must learn to control in our transition to adulthood, laying them quite bare to the audience.

While emotionally powerful and incredibly affecting, Submarine doesn’t lack for laughs, even, if at times, you’ll not be ready for them. The first hour or so is full of dry and original wit, and while this does recede as the film builds dramatically, even moments of intensity are offered their relief in lighter turns that follow . Ayoade, shows remarkable grace with the camera realising countless strings of jokes with the deftness and subtlety of a true auteur. The casting is impeccable and the performances uniformly outstanding. Roberts displays incredible potential as both a comic and dramatic actor for the future.
With British cinema often an even choice between hum-drum, kitchen sink dramas, hard-as-nails gangster pugilism or stiff-upper-lip period pieces it is truly refreshing to see a British film which relays Britain in a way that us Brits can actually relate to.

Ayaode manages to capture the gloomy mundanity of these isles with an uncanny and yearning beauty. Rendering our dismal British landscape in ways that produce moving and provocative imagery, Ayoade truly embraces the language of cinema, constructing his narrative from ingenious visual metaphors and disquietingly familiar dialogue.

Submarine is an absolute must see. Side-splittingly funny and achingly beautiful, this is filmmaking at it’s very best; an equal contender to The King’s Speech (2010) for this decade’s most remarkable British film.
Matthew Groizard
http://www.player.previewnetworks.com/v4.0/PNPlayer.swf
Facebook
Twitter
Pinterest
LinkedIn
Go to mobile version