What is there to say about Zonad (2009)? It’s a bizarre comedy from the shores of Ireland by writer and director brothers John and Kieran Carney, which tells the story of Liam Murphy – a recovering alcoholic who escapes from rehab to the local town of Ballymoran. While there, for one reason or another, he convinces this naive little town that he is actually an alien from out of space called Zonad.

The town embrace him and he becomes a local celebrity and rather popular among the womenfolk. But why would he do this? Because this way he gets free beer and gets to sleep with half the women in the town. The plan works fine, until Murphy’s escapee partner Francis O’Conner shows up in the town too, claiming to be Zonad’s superior, Bonad – and he wants in on this free booze and celebrity status… 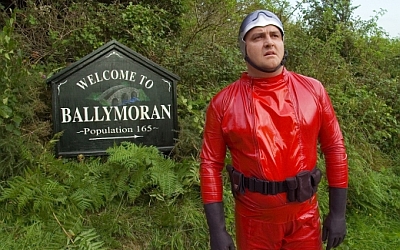 So, Zonad is a very oddball comedy. But is it any good? Well, Zonad is an incredibly mixed bag. One part of it is a rather cheeky, quirky, comedy film, filled with fun and laughs, while the other half is full of misplaced humour that falls flat. The script hits some really humorous moments that made me laugh out loud but at times it left me sitting in stony silence wondering what went wrong.


What I love about Zonad is its self awareness. John and Kieran Carney both new they were making a film that had its tongue placed firmly within its cheek, and it shows. All of the characters are loud and proud stereotypes with the volume turned up to 11, and this is mirrored perfectly in the performances of all cast members involved. Simon Delaney shines as Zonad and David Pearse does very well in the antagonistic role of Bonad. But the true star of the whole show is Janice Byrne as the lovable, youthful and naive schoolgirl Jenny, who takes a shine to both Zonad and Bonad as they fight for her affections. She takes this one dimensional role and plays her to perfection, never missing a beat and always stealing scenes.

Zonad is a Marmite film, but it’s not a case of whether you love it or hate it – it’s a case of either you get it or you don’t. If you’re in the market for an oddball comedy that will entertain you with a few laughs for 90 minutes, you could do a lot worse than Zonad. But if you like your comedy a little more straight laced and by the numbers, this may not be your cup of tea.