Continuing to reinvent himself as an ageing hard man, as witnessed in performances such as the wronged father in Taken (2008) and the cigar chomping Colonel Hannibal Smith in the recent big screen rehash of The A-Team (2010), Liam Neeson’s latest film Unknown (2011) sees the mature actioner subjected to a perplexing bout of stolen identity.

On a trip to Berlin with his wife (Mad Men’s January Jones), where he is scheduled to give a presentation on bio-technology, Martin Harris (Neeson) is involved in a car collision which renders him comatose for four days. Upon awakening, Harris discovers that his existence has been tampered with: his wife doesn’t recognise him, his colleagues treat him like a stranger and, worse yet, he comes face-to-face with the ‘real’ Martin Harris, who has somehow taken over his identity and his marriage.

Utilising the help of a guarded and apprehensive illegal immigrant (Diane Kruger), Harris battles to figure out who he really is and get his life back, only to discover that he has become embroiled in something bigger than he could have imagined. 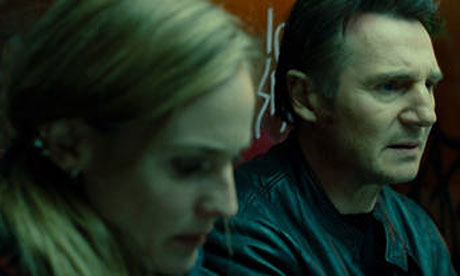 Comparisons with Taken are all too evident throughout Unknown: Neeson is another stern, intelligent stiff who travels to Europe to regain something stolen from him, complete with obligatory loud car chase and a pace that drip feeds the audience key information. It’s these similarities that rob Unknown of its freshness and any chance of being original, or for that matter, memorable.

The best thing the film has going for it is its reasonably inventive premise, and the fact that the central conflict faced by the protagonist is one of the very few within the thriller genre to be genuinely unpredictable. Yet, once the fairly disappointing veil has been lifted, the puzzling suspense is undermined by a half-hearted, dull finale.

The cast, similarly, do little to drum up anything by way of tension. Harris (Neeson) is vacant throughout, with unfortunate facial expressions that never exceed anything more than puzzled bewilderment and prevent the audience from fully investing in his plight. He also fails to create a believable chemistry with Mrs Harris (Jones), who is herself utterly wooden, in the sporadic scenes that they happen to share.

Diane Kruger is given the thankless role of embodying the foil for the screenplay to unload all of its baffling exposition onto, looking the part but never quite igniting the screen. Any hint of a romance between her and Neeson is jettisoned in favour of several fight scenes within confined spaces, all shot in constant close ups, which are obviously intended to convey the claustrophobia, but become frustrating all too quickly.

With little going for it and a laughable script, Unknown coasts along at a fast enough pace to justify the 113 minute runtime, but the weak acting, wasted plot and outlandish ending make it a film I couldn’t possibly recommend.
Edward Frost