In 2009 the National Theatre launched NT Live, a project to broadcast their plays live to cinemas in the UK and around the world via satellite. The initiative has been a huge success, and next to reach cinemas is Academy Award winner Danny Boyle’s much-lauded production of Frankenstein, which is playing at the National Theatre until May.

The myth of Dr Victor Frankenstein and his monstrous creation has become embedded in popular culture through countless stage and screen adaptations, from the 1930s Boris Karloff classics and the later Hammer Horror movies, to Kenneth Branagh’s big-budget Frankenstein (1994). However, Boyle’s adaptation bypasses film history and returns to the original source of Mary Shelley’s 1818 novel.

Scripted by Nick Dear, the play is an intelligent and sensitive re-imagining that combines spectacular imagery and intimate drama while capturing the spirit of Shelley’s story. Dear’s most ingenious move has been to strip down and reshape the primary text so that the first half of the play is based on the central six chapters of the novel in which the Creature narrates his past to Frankenstein. Dear skilfully transforms the Creature’s life from straightforward account of his memories into an intensely raw experience set in the present.

Frankenstein is a tale of male reproduction and parental responsibilities. Victor’s desire to know nature’s secrets becomes all-consuming; his aim in creating life is to acquire the power of an Übermensch. Fearing mature sexuality and the duties of conventional parenthood (Victor can barely stand to touch his fiancée Elizabeth), his experiment allows him to reproduce without the direct involvement of his body. It is creation with the scientific mind. The male scientist dominates nature, he penetrates her to find the cause of generation. Similarly, the Creature learns that to be a man is to control female nature, which he does by raping Elizabeth. Science and sexual violence are interlinked in this play, and Victor’s failure to be morally responsible for his grotesque child inevitably causes a devastating knock-on effect. 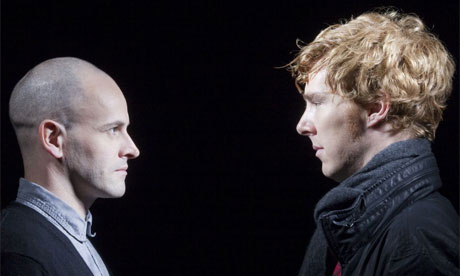 Boyle’s decision to double cast the two leading roles is both inspired and truthful to Shelley’s text. The Creature is Victor’s doppelgänger and objectified id, they are complementary and antithetical beings whose futures are irrevocably bound together. Victor’s pursuit of the Creature across the Arctic in the climactic scene becomes their mutual reason for living. The nightly alternation of the characters by Cumberbatch and Miller conveys literally the idea that Victor and the Creature create each other, and their performances in these roles doubly reinforces the bond between them.

Cumberbatch impresses most as Victor, playing him as an intellectual master and sneering, arrogant effete, as opposed to the exaggerated virility of Miller’s version. In the more physically demanding part of the Creature both actors give astonishingly affecting and multi-layered performances. Miller is plaintive and animalistic in the role, moving around with a stiff gait and bemused naivety that immediately gains our sympathy. Cumberbatch’s Creature is more dangerous; he is eloquent, cruel, and playful with a manipulative edge. He commands the stage with graceful movement that often verges on balletic.

Mark Tildesley’s remarkable stage design and Bruno Poet’s atmospheric lighting create a strange, displaced world that incorporates elements of the ancient and the modern, of Gothic fantasy, technology, and science. The Olivier Theatre’s drum revolve is used to great effect, conveying a vast spatial area from the laboratory at Ingolstadt to the sublime mountains of Geneva, and from barren Scotland to the tracts of the Arctic. The score by Underworld and Alex Baranowski emphasises this disorder of place and time, the thudding, crackling beats evoke a sinister, pulsing otherworldliness reminiscent of both the mechanical beasts of the Industrial Revolution and of 21st century nightclubs. Boyle’s Frankenstein is an emotionally moving and visually inventive triumph that is not to be missed.