During one scene from Frank Ripploh’s semi-autobiographical tale of a sex-obsessed, German school teacher Taxi Zum Klo (1980) we witness a man lying on a bed being sprayed in the face with urine. For ten, maybe fifteen seconds, all we are shown is the increasingly soaked and excited gent and a stream of the aforementioned urine being directed by an unknown party.

Although a large percentage of the film-going public would claim to be appalled by the allusion of one man relieving himself on another, I thought it was a brave and interesting scene. Certainly my first experience of seeing a ‘golden shower’ on the big screen and being a liberal fellow in an art house cinema I had no problem with the suggestion. Hell, it was only a stream of water or something; it’s not as if Ripploh had furnished us with a wide shot of him with his cock out actually pissing into the guy’s mouth!
When the wide shot of Ripploh with his cock out actually pissing into the guys’s mouth arrived, a strange silence swept across the audience. Nobody walked out, nobody vomited on the person in the neighboring seat and it wasn’t long before the silence was replaced with laughter – though it wasn’t the act itself which we all found amusing, it was the director’s audacity.
Taxi Zum Klo is audacity personified. Upon its release it quickly became notorious for its graphic portrayal of gay sex. Few people have actually seen the film in its entirety, altough a few gay men of a certain age might have seen the sex scenes cobbled together in a private Soho club or on a grainy videotape. Taken out of context those scenes wouldn’t look out of place in a hardcore porn movie, but to dismiss the film as being nothing more than a sexual aid does Frank Ripploh a gross disservice: it’s a funny, provocative and clever piece of film making. 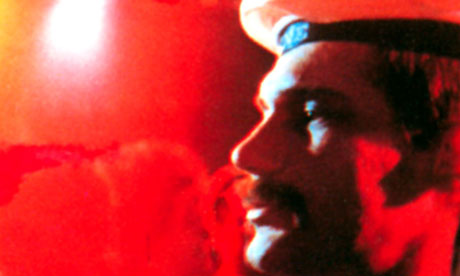 Shot in a documentary style on a shoe string budget, Ripploh is fearless in exposing his life and desires. By day he’s a good primary school teacher who shares a fabulous relationship with this students and by night he’s a sex tourist haunting public toilets in search of cheap thrills. Along the way he meets a man in a cinema and falls in love but his lust, verging on nymphomania, eventually spirals out of control.

Ripploh is unapologetic about his sexual exploits and being as this film was made in a Pre-AIDS Germany we shouldn’t make the mistake of judging his reckless behaviour by modern standards. Plenty of heterosexual folk liberally put it about back then without fear of reprisal and although some may question his morality, in reality it’s nobody’s business what Frank gets up to with his own body.

The film also attempts to dispel certain myths regarding homosexuals and children. At one point a public information film about paedophiles is inter-cut with scenes of Frank tutoring a student. He deliberately provokes the audience and although he does it in a humorous way he is also making a point. Just because you’re gay that doesn’t mean you pray on children and just because you have a broad sexual appetite that doesn’t mean you can’t be good at your day job. There is no conflict unless you, or a disapproving other, creates one.
All in all the film works best as an insight into the normality of gay life. Frank may run around like a sex-crazed Timothy Claypole at times, and the editing is a little on the clunky side, but if you want to be challenged and experience a piece of cinema quite unlike anything you have seen before then ‘Taxi Zum Klo’ is essential viewing. As a straight man – who, admittedly, has always shied way from gay cinema, believing that it wasn’t for him – I was pleasantly surprised.

Although I’m not going to rush down to Blockbuster video and order a stack of homoerotic DVDs, I’m glad to report to anyone laboring under the mis-apprehension that watching two men have sex turns you gay that it simply isn’t true…now where’s my copy of Brokeback Mountain?