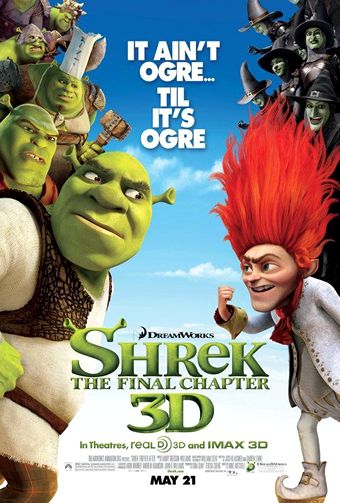 After the disappointment of Shrek the Third in 2007, there wasn’t much expectation for a fourth Shrek movie. Many felt that the franchise was tired and the anti-fairytale formula was exhausted. Nevertheless, DreamWorks Animation obviously thought there was life in the old dog yet; the final instalment of the franchise saw its release last month, only weeks before its titanic summer competitor Toy Story 3 (2010).

Shrek Forever After: The Final Chapter (2010) takes place immediately after Shrek the Third. Shrek (voiced by Mike Myers) is beginning to feel the stresses of fatherhood and family life. As he has become something of a celebrity in the land of Far Far Away, he is beginning to miss what it felt like to be loathed and feared. 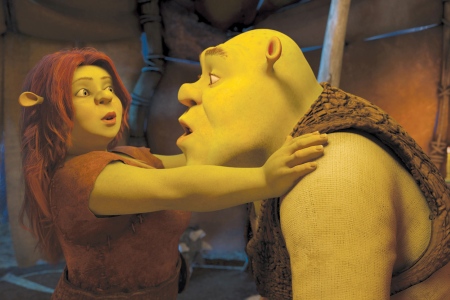 Back in the future Rumpelstiltskin offers Shrek just one day to be feared and loathed again, but at a cost – he must give up one day from his past. Ever cunning, Rumpelstiltskin takes away the day of Shrek’s birth. Shrek gets what he wants, he is feared and loathed by everyone for a single day, but having technically never been born; nobody in Far Far Away, including his friends, remembers who he is. Shrek’s plight is clear: he must win back the trust of his friends, win back the love of Fiona and save the Kingdom of Far Far Away from the evil Rumpelstiltskin.

Overall a shadow of the first two Shrek films, Shrek Forever After does have its redeeming features. There are moments of good humour (which become fewer and further between as the film progresses). Another positive from Shrek Forever After is that it is aesthetically pleasing, and manages to incorporate 3D technology without descending into cheap gimmickry. The animators at DreamWorks have done a fantastic job of animating Shrek’s world, from the colour saturated swamp to the dull, colour starved Far Far Away under the rule of Rumpelstiltskin

However, the ‘anti-classicalism’ agenda of the Shrek films is, as ever, the focus of this film. The attack on the formulaic construction of Disney’s fairy tales seems hypocritical as this film uses the same tired formula used throughout the franchise; only this time, it is weaker than ever. For fans of the Shrek series this can only come as a huge disappointment.

Furthermore, the main problem with this film is that it takes the tired Shrek formula and tries to shoehorn it into the plot of It’s A Wonderful Life (1946). This is essentially the classic film with the Shrek franchise’s standard anti-fairytale construction and pop culture references thrown into the mix. The entire film seems tired and unnecessary when you could just sit back and watch a classic film, from which this movie has stolen its entire premise. Perhaps more importantly, the film as a whole doesn’t match up to How To Train Your Dragon (2010), DreamWorks’ hit from earlier in the year, which signals that perhaps it’s time for DreamWorks to leave Shrek far, far away and move on to pastures new.