To the uniniated, it’s hard to sum up the audaciously ambitious universe of Hideaki Anno’s Evangelion saga without a little history, and so… First broadcast in Japan back in 1995, Anno’s original TV series Neon Genesis: Evangelion garnered instant acclaim both from fans and critics alike. However, production was anything but smooth, with the creative process constantly subject to financial compromises, that showed in the finished work.

Anno’s dissatisfaction with the original series lead him to further build on his ideas with a series of feature length films and re-edited rereleases of the original episodes that attempted to clarify his initial intentions. This finally culminated in The Rebuild Of Evangelion, a series of four feature length films, which drew upon the original series to finally realise the complete Evangelion story. The first in this ‘rebuild’ was released in 2007, entitled Evangelion 1.11: You Are (Not) Alone. 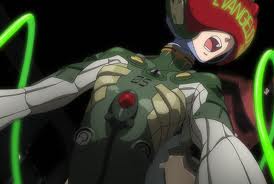 As I’ve already mentioned, summing up Anno’s ambitious premise is no mean feat, nonetheless I’ll take a shot. Drawing upon a vast range of literary material – as well as his own experience of clinical depression – Hideako Anno combines Judeo-Christian mythology, Freudian psychoanalysis and the philosophy of Sartre and Kiekegaard with giant, pugilistic mecha robots to create a deeply personal, sci-fi-action experience.

The underpinning foundations of the story itself are both immense and complex, with dozens of bodies, organizations, characters, events and concepts meshing to form an expansive geopolitical commentary which oversees and underlies the lives of the main characters.

The central story follows the life of Shinji Akari, a fourteen-year old boy specially selected by his Father’s organization NERV to pilot a cutting-edge mechanized weapon, the Eva. Bio-mechanical giants of extraordinary power, the Evas have been created for a single purpose: to protect mankind from the threat of Angels. Though, not ‘angels’ in the traditional sense; these celestial monstrosities have beset the Earth with one intention: the destruction of all life on a transcendental level.

To expand further on the story at this point would be redundant as the massive and sprawling narrative would take a dozen or so more paragraphs to explain. The Evangelion series has been paid many compliments over the years and they are certainly justified – this new ‘rebuild’ is no exception. Anno’s latest incarnation is a fantastic spectacle which draws on the latest technology to deliver absolutely breathtaking visuals, so visceral you may well find your teeth clenched as the characters battle through the countless adversaries. 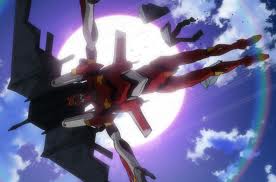 Anno’s exploration of complex moralistic and psychological themes is as lively and arresting as it was in his original vision, only time has afforded him a fresh clarity with these subjects, which permeates the re-jigged story. The characters are inescapably human and delicately crafted to represent the best and worst traits in all of us. They are weak, yet somehow courageous, callous and compassionate by fluctuating turns, whilst damaged and uncertain in their own lives.

It is hard to review Evangelion 2.22 as a simply stand-alone work. Without the context of the other three – two of which are yet to be released – it lacks the deeper meaning that the full story will deliver. By itself the film is nonetheless a beautifully arresting work of visual art, marked by fantastic animation and design work, compelling characters and boundless narrative depth. Surpassing even the achievements of the original, The Evangelion Rebuild could well be the magnum opus of the saga.