Given that the finale of 2009’s humorous and hugely popular comedy The Hangover pretty much wrapped up things by filling in all the blanks of its narrative macguffin, completely detailing the events of the raucous night before, the prospect of a sequel was both puzzling and questionable.

Yet, two years later here we are with this second ‘part’; less a continuation and more a reimagining of it’s predecessor that nonchalantly copies its content and plot devices verbatim from the original. The Hangover Part II is then a sluggish, pointless and overly vulgar shot for shot copy of its far superior forebearer, though it is neither as clever or as tactful.

Whereas the first was merely mean-spirited, the sequel is simply distasteful; the once likeable characters now vulgar shadows of their former selves. Even Bradley Cooper – whose apparent charm and adoration as a watchable leading man escapes me – is thoroughly unlikeable while Ed Helms, playing the affable dentist Stu, shrieks and winces his way through almost each and every scene – it becomes grating all too quickly.

Zach Galifianakis, once hilariously eccentric, replays the same character he’s become typecast with since the original, pedaling the same old wacky shtick he has now become so synonymous with and flogging lowest-common-denominator gags that miss more often than they hit. He plays the mentally challenged Alan in pretty much the same way he did first time round, only with more of a sinister edge, which leaves his affection for a drug smuggling, cigarette-toting monkey the only evidence of him being an actual human being; he raises one or two minimal smirks in the process, but that’s as far as it goes. 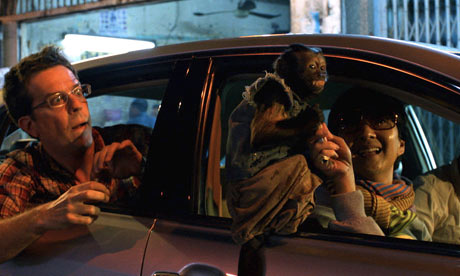 Justin Bartha, the previous husband-to-be and vanished member of the ‘wolfpack’, again plays second fiddle to the three protagonists, missing out on the quest to find the latest misplaced victim of the group, Teddy (the teenage brother of Stu’s fiancee). Also resurfacing is Ken Jeong, a revelation in the first film as the effeminate gangster Mr. Chow, now brought back to the fold merely for penis sight gags and annoyingly lewd absurdities, annoying and vastly overused this time round. Paul Giamatti even crops up in a small role as an ill-tempered businessman, stealing the entire film right from under the lead’s noses.

Of course, the film isn’t exactly the same as the original. The setting shifts from Las Vegas to Thailand and the seedy underbelly of Bangkok, the sight of the latest forgotten evening which mirrors the tonal lapse into darker territory, making even the most gross jokes of the original seem meager and tame. Rest assured that Thai ladyboys and other xenophobic clichés are put abundantly to good use.
The Hangover at least balanced its distasteful elements with some genuinely funny jokes embedded within an original narrative structure, delivering the clues in dribs and drabs. This time however the jokes are banal and gratuitously disgusting, as embarrassing to watch as the inevitable cameo in the final scene. Well, almost, it needs to be seen to be believed.
The major downside brought on by the original was that it established a formula that its sequel fully exploits, paving the way for a groan-inducing self-awareness (“It happened again” is said several times) that verges on desperate parody. Todd Phillips struck gold first time round and even tried repackaging the winning formula in last year’s unsuccessful, Planes, Trains & Automobiles-esque buddy movie Due Date (2010) (again with Galifianakis).

In the sequel, we catch Phillips attemping to re-hash his miniscule masterpiece with evening greater transparency, but it simply hasn’t worked. Painstakingly giving almost every element from the first a dirtier equivalent, The Hangover Part 2 is as unnecessary in content as it is in its existence, an experience not to be entered into lightly.