Killer Klowns From Outer Space (1988) delightfully poor premise follows a U.F.O. resembling a circus tent full of maniacal monster ‘klowns’ armed to the teeth with fairground-based weapons lands on earth with the intent of attacking the residents of a small American town. The film has a fairly spectacular cast of B-movie actors (Grant Commer, Suzanne Snyder and John Allan Nelson) who have worked on such classics as Bay Watch, Knight Rider, Air Wolf and Weird Science (1985).

The cast all provide typical B-class acting as they desperately avoid acid-cream pies and man-trapping balloons. This comic-horror film attempts to build tension with the love triangle of Mike, who is dating Debbie, who formerly dated rookie cop Dave. He is in turn watched over by the teenager-hating Chief Officer Mooney who proudly steals the first line of the movie with the memorable “Look at this son of a bitch”. 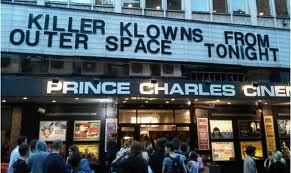 The inhabitants of this emotionally tricky scenario soon end up having to deal with a host of freaky clown aliens intent on sucking the local residents blood! We hop, skip and jump through all the inevitable horror movie clichés including a shower scene, a forest chase and the ever-sceptical cops – it was so wonderfully bad that the whole cinema was roaring with laughter.

The screening was held at the Prince Charles Cinema off Leicester Square as the first of their ‘Good Bad Movie Club’. The club has been created by Paul Vickery and will screen a series of wonderfully hilarious ‘so bad that they’re good’ films. Bad film clubs have existed elsewhere, in particular the Barbican’s ‘Bad Film Club’ (sadly cancelled for the time being). It was hosted by Nicko and Joe who would provide commentary on classics such as Piranha 3D (2010) and Anaconda (1997) during the film for comic effect.

The Prince Charles night has given new life to the format and satisfies the needs of us creatures of the night who yearn for 90 minutes of bad effects and dire acting for our warped humours to delight in whilst eating free candy floss provided to get us in the mood.