Finally seeing the light of day in its full uncut glory – Adam Green’s Hatchet II (2010) is released on DVD two years after the original movie tore up the slasher-horror scene. Set minutes after the first film ends, Hatchet II carries on the mythology of Victor Crowley – the monstrous being that wanders the swamps of Louisiana.

Having survived his brutal slayings the night before, Marybeth Dunston (Danielle Harris) is looking to find out more about the mysterious Crowley – the man who killed her brother and father. Through a series of quite convoluted events, Marybeth and a team of hunters led by Reverend Zombie (Tony Todd) go back into the swamps to locate the bodies of her dead family and take out Crowley once and for all.

Much like the first Hatchet (2006), Hatchet II prides itself on its excessive gore, high body count and nods to classic horror movies by using iconic stars such as the aforementioned Tony Todd, Kane Hodder and Tom Holland. By using these traits, director Green attempts to hack into the tight-knit horror fanbase by making a slasher movie made by horror fans for horror fans. On those levels, the film really works.

The gore levels are insanely high. According to noted horror film blog Bloody Disgusting, Hatchet II used 136 gallons of fake blood – 81 gallons more than its predecessor. And because the gore level is so high, the death sequences are incredibly inventive. Many horror aficionados will tell you that in order for a slasher movie to be successful, it needs to top the films that came before it in terms of being creative with killing off cast members – and Hatchet II succeeds in that ideal. I would say however, that Green went one step too far with a few of the death sequences. While they have been filmed that way to appease the blood thirsty fans, they can sometimes come across as cartoonish and comical. 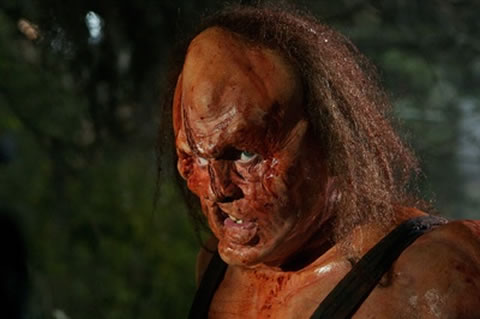 Which does bring me to my biggest complaint about Hatchet II – the deaths themselves may be creative, but the plot and characters are incredibly weak. Every member of the 15 or so character list, bar Marybeth and Reverend Zombie, are unbelievably superfluous and are there just to be killed in a red soaked blood bath. It’s really annoying as it means you can’t invest any time or emotion into anyone. Even Victor Crowley (who owes a huge debt to Jason Voorhees) isn’t given too much in terms of character development and is reduced to nothing more than a killing machine in the same vein as the man who he’s been clearly copied from.

What I find the most disappointing thing about Hatchet II, is that the first instalment didn’t have this issue. It was a very clever and inventive movie that didn’t rely on ridiculous gore to appease its audience. Hatchet II, despite being written at the same time as its predecessor, is nothing more than a lazy attempt to please horror fans.

Hatchet II tries to hide behind its copious gore levels and over the top kills to cover up for its lack of story originality and character but fails badly. If you are a fan of the genre, then at least you can get a kick out of the death scenes, but anyone else will be very unsatisfied.