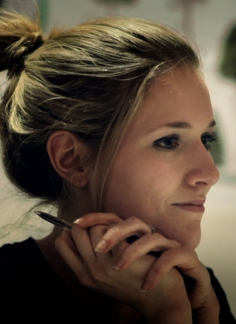 Doffing its cap to the contentious mumblecore sub-genre, Girl in Motion (2011), a sweet but slight short film from writer/director/editor Phil Bowman details two weeks in the life of Amy De Bhrún’s twenty-something writer as she struggles with the various pressures of life, love and independence. Girl in Motion (2011)– with a title that could easily be a mid-period Belle and Sebastian song about a promiscuous high-schooler – feels indebted to the films of Eric Rohmer. The same listlessness – both of character and narrative – pervades both films, along with the verité shooting style that immerses you in the inactivity as it doesn’t unfold. 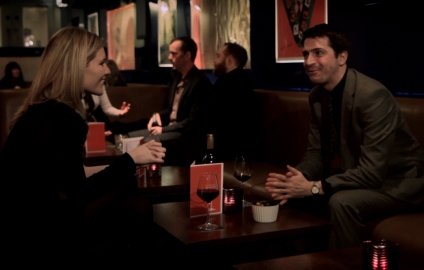 Admittedly, Girl in Motion throws in a number of stylistic flourishes that Rohmer would have baulked at, but these are often the weakest links in a film that is most watchable when very little is happening. Whereas, say, The Green Ray (le rayon vert, 1986) allows itself time to grow into an accomplished, spiritual work, Girl in Motion (at 17 minutes) can’t help but feel underdeveloped, which is a shame as there’s much to like. Boasting lovely HD cinematography that clearly makes use of a lot of available light, the film evokes a wonderful sense of space, environment and a love of the city. The pivotal night-time sequence that segments the film uses London locations such as the Southbank to wonderful effect.

Amy De Bhrún is very good in the lead role, bringing a naturalism that often shows up the film’s lesser performance but in turn anchors the film and ensures that, even during the standard scenes of blind dates and gossipy phone calls, we are never less than fully engaged with the character. Another interesting element is Bowman’s inclusion of the character’s synaesthesia – visualised by colour radiating from Bhrún’s palms. Such an inherently visual condition, it is a wonder that it hasn’t been widely explored by filmmakers, Paul Thomas Anderson’s masterpiece Punch-Drunk Love (2002) being the only example that immediately leaps to mind.