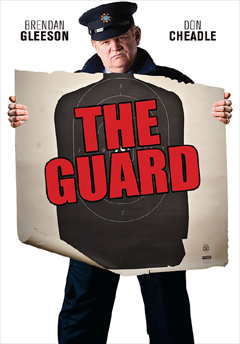 The Guard (2011), directed by John Michael McDonagh (brother of In Bruges [2008] director Martin McDonagh), is an outrageously hilarious and inappropriate comedy that allows the ever under-rated Brendan Gleeson to shine opposite a wonderfully deadpan Don Cheadle, with a supporting cast of other talent including Mark Strong and Liam Cullingham.

Gleeson plays Sergeant Gerry Boyle, a small town Irish cop with a gaggle of highly unorthodox habits including a penchant for prostitutes and drug taking. He shows very little interest in the law and is also shown struggling to cope with his dying mother. That is until the arrival of FBI agent Wendell Everett (Cheadle), following a drug smuggling outfit made up of the violent Cornell (Strong) and Francis (Cunningham), who are trafficking cocaine with a street value of half a billion Euros.

The Guard is a superbly crafted comedy that gives a hilarious angle on Irish culture, in particular its taste for inappropriate humour. As Gerry puts it, “I’m Irish. Racism is part of my culture”. The Guard touches on nearly every subject taboo in Irish society including the Protestant/Catholic divide, theEast/West divide, homosexuality and infidelity. 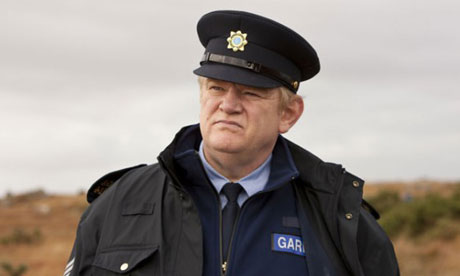 The Guard, through its humour, prompts you into thinking about the larger issues within small communities especially Irish identity. Much like In Bruges, here is more going on here than just a simple comedy. The action scenes, including an excellent Spaghetti Western-style shoot-out, posses an uncanny similarity to those of In Bruges; however, I would vehemently argue that this darkly humoured comedy from John McDonagh is the stronger of the two for its finer balance of comedy, plot and action.

The cast are all superb and The Guard shows just how great and under-rated an actor Gleeson is. The character of Boyle is skilfully played with understanding of both his confrontational personality and tenderness. The scenes where he comforts his dying mother (played by Fionnula Flanagan) provide the sensitive element of Boyle’s character: in one scene he takes her out of a retirement home to a pub to listen to a ceilidh band. It’s within moments like these that the audience finds a wonderful connection between the two characters, reflecting an honest, emotive mother/son relationship.

The greatest strength of The Guard is in its understanding of the genre, providing near constant laughs through a well-crafted script and pitch-perfect delivery, a particularly rare experience (with perhaps the exception of Tucker &amp; Dale vs. Evil [2011] – review to come). Put simply, this is an extremely funny comedy that importantly doesn’t forget to add a little emotion and tenderness here and there.