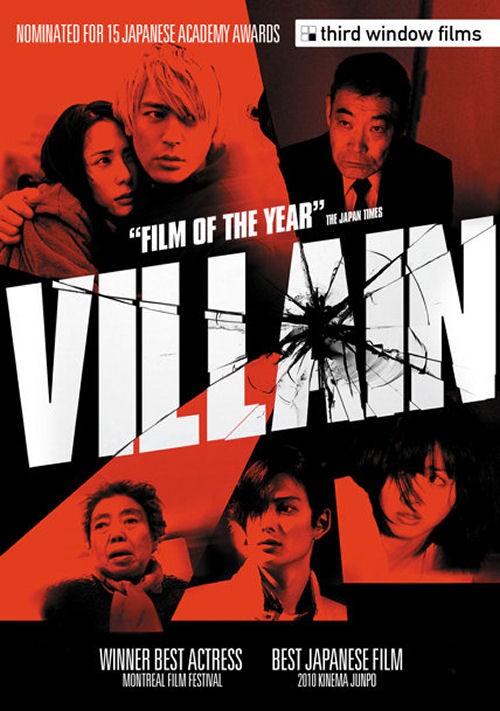 Sang-il Lee’s Villain (Akunin, 2010) is one of those rare and touching masterpieces of cinema. From beginning to end, this film radiates incredible sadness, creates a whole new world of inexplicable sympathy and compassion, while the villain the title suggests, shifts from one character to the other, continually challenging the perception of good and evil.

Director Lee creates a film which overcomes the boundaries of the cinematic world and transcends the events into the hearts of the audience and much like the effect of the recent The Tree of Life (2011), the story happens not on the screen, but within the recesses of the viewers mind.

With a slow beginning, not promising much, apart from a few clichés and the formulaic genre tropes of your standard murder thriller, we are presented with the story of a simple quest in search of a young girl’s murderer, however Villain takes a 180-degree turn after hitting its half way mark, and unexpectedly grabs the heart and soul in the later minutes of the storyline.

More significantly, Villain does this without utilising the means of cinematic artifice, little in the way of flashy set pieces, breath-taking cinematography or spectacular soundtrack, rather Villain presentation is simple; a simple story of life and death and yet with this simplicity slowly and subtly turns the viewer into an emotional train-wreck and throws them into a state of utter confusion instead. Rather than directorial visual bravado, Lee’s directorial brilliance lies in his talent as a puppet-master of emotion and the incredibly convincing characters he has built to live and suffer in his little world.

There is not much narrative to be built upon, neither is there any mystery as to who the culprit of the crime is. And that is not what Lee is aiming at, for the clarity of the situation meets the complicated nature of the human mind and soul, and the ambiguity which it provokes in both the viewers and the characters is transformed into a confusing mix of sympathy and compassion, sadness, guilt and a thousand other shades of human emotion, as reflected in the psychological state of Mitsuyo, Yuitchi, his aunt and Keijo, the father of the murdered girl. It is an attempt to unveil the complex path of human reasoning and the impossibility to understand others’ intentions or motives, clearly resulting in a tragic mixture of events and their unfortunate consequences. 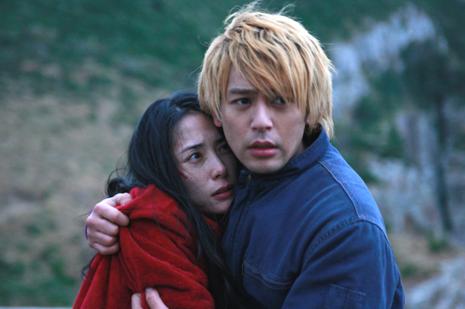 Eri Fukatsu, who delivers an impressive performance in The Professor and his Beloved Equation (2006) now turns into a deep pool of complicated emotions and perfectly summarises the atmosphere of being a woman, trapped between her loneliness and desperation and her established morals, which will inevitably lead her towards unhappiness, should she choose to abandon her newfound hope. Satoshi Tsumabuki, however, is the absolute focus in this film, as his performance is truly spectacular and is evidently showcasing his strong acting skills, shaping his portrayal of a deep emotional conflict as flawless and ultimately assisting him in carrying the ending scene in such a magnificent manner that it throws the audience back into a confused state when clarity is thought to have been discovered.

Hikari Mitsushima, whose presence is always a sight to see, despite her brief appearance in the film is once again perfectly capable of catching the essence of her character and provoking a mixture of sympathy and irritation which is the perfect balance to complement the rest of Villain’s drama.

While the marginal characters do not bring much to the story as their suffering is only marginally portrayed, much like one’s sufferings are marginal to another, they create a different shade of painful emotion and blur the boundaries of good and evil even more, only to further confuse the audience about their conclusions as to the villain nature of the lead characters. Yoshino’s father is on the one side, mourning a lost daughter, creating more sympathy towards her unappealing character and taking away from the sympathy assigned to the villain, while Ryuichi’s aunt is used as an evidence of the fact that love does not distinguish between good and evil and through her Lee is able to portray the so-called villain as the only comfort in a broken home.

Lee moves on from his previous mould set of films, often dealing with minority groups stepping out of their comfort zone, which would usually aim at a comical effect, and goes into a deeper state of emotional confusion where he mixes good and evil with society’s judgements and expectations and the fragility of the human soul, which inevitably leads to disastrous circumstances.

Sang-il Lee’s Villain effortlessly challenges traditionally established assumptions about the black and white moral ground of society and critiques more concrete and fundamental problems, interwoven with complex sociocultural discrepancies, and turns into an absolute grey-area masterpiece of deep and subtle human emotion with a touch of sociological criticism, where one person’s desperation for redemption meets another’s utter loneliness and creates a world of fragile vulnerability, where happiness is like sand-dust and the line between right and wrong is blurred within the walls of the cold lighthouse, surrounded by the vastness of the peaceful sea.