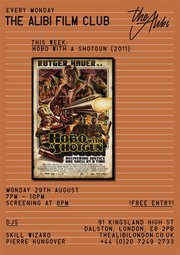 Screened at last Monday’s Alibi Film Club in Dalston, Jason Eisener’s Hobo with a Shotgun (2011) – starring a grizzled Rutger Hauer – is the second feature-length exploitation feature to have come from one of the fake trailers shown before Robert Rodriguez and Quentin Taratino’s Grindhouse (2007) double-bill.

The Alibi Film Club offers a low-key and casual take on the current trend for communal cinema experiences. The basement bar’s relaxed atmosphere and shabby chic-snugness attracts a local crowd and although not equipped for a large audience it was an intimate night with a sense of humour, courtesy of the ‘Guess the bodycount’ quiz.

In Hobo with a Shotgun, Jason Eisener demonstrates the wrath of a morally-driven hobo (Rutger Hauer, Bladerunner) entering a corrupt and debauched dystopian town in this sleazy and gritty vigil anti horror.

Shot in vintage Technicolor, its corny opening promises a much more naturally authentic genre piece than its predecessors such as Machete (2010), yet fails to deliver any intrigue. Even for an inherently hollow genre the characters remain largely undeveloped and the abrupt ending only serves as a reminder that cinema has come a long way since the days of B-movie and drive-through shock horrors.

There is arguably a message in the fact that the hobo-come-hero represents modern society’s need to vanquish materialism and return to core moral values which is quite an interesting choice for this Canadian release given the country’s history of social reform.

Even the tyrannical sons that terrorise the town are portrayed as spoilt brats, although one is not far from becoming a twisted pastiche of Stifler in the American Pie franchise. Instead of exploring this theme the film treads too close to being a shallow celebration of the depravity found in exploitation films and falls short of modernising or challenging it where Tarantino and Rodriguez had succeeded before.

Despite efforts to parallel Planet Terror’s (2007) ice cool gun wielding heroine played by Rose McGowan or even Machete’s She (Michelle Rodriguez), Hobo with a Shotgun’s equivalent lacks the strength of its modern counterparts.

Using a younger and more vulnerable female character could have served as an interesting launch pad for a down trodden women holding her own but this only materialises as a severely watered down version with little edge. This is ultimately just another example of why this film fails to live up to its trailer’s potential and is not self deprecating enough to distract from its tame grisliness and contrived punk aesthetic.

Regardless of its flaws, there are some genuine laughs and fans of the Trailer Park Boys TV series will be delighted by the appearance of cast members Rob Wells and Sam Tarasco as a tribute to Canadian culture.

With the current wave of Marvel and DC comic remakes, the film does represent a refreshing antidote to the overly saccharine Hollywood hero. So maybe next time someone asks you for 50p in the street, you’ll think twice about not handing it over.