Boys on Film: Bad Romance (2011), the latest anthology from arthouse distributors Peccadillo Pictures, is a selection of tender and sometimes shocking stories from such diverse directors as Christoph Scheerman and Tomer Velkoff. Starring – amongst others – Vincent D’Onofrio and Xavier Dolan, the ten short films mix love, mystery and twist-in-the-tail jolts (a la Tales of the Unexpected), and are probably at their best when dipped into one at a time.

As with all film collections, some of the shorts inevitably stand out, whether it’s Just Friends? (2009) from South Korean director Kim Jho Kwang-soo, which starts with the Asian equivalent of a Euro-trash pop video, and follows the relationship between Soek and his soldier boyfriend Min-soo.

Another stand out effort is opening tale Curious Thing (2010) by American director Alain Hain, about two young New Yorkers coming to terms with their feelings for each other with poignant results. 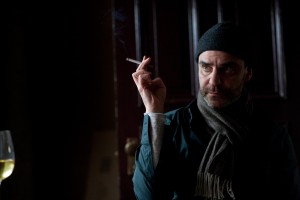 Director Joachim Back’s 2009 Oscar-winning short The New Tenants, finds crazed husband Jan (D’Onofrio) and tenant Zelko (Kevin Corrigan) caught up in a world of drug-dealing and lying lovers with a grisly Tarantino-style twist, whilst New Zealand director Christopher Banks’ Communication (2010) is a virtual symphony to the tragedy of religion’s often stifling restrictions on self expression and sexual acceptance.

If one story should be kept to the end, it’s the entrancing Mirrors (Miroirs d’été, 2007) from Canadian director Etienne Desrosiers, which follows the confused young lead Julien, as he tries to make sense of his sexuality whilst surrounded by his promiscuous friends and family during a bucolic summer by the lake.

The intoxicating beauty of Mirrors and the innocence which Dolan lends to the character of Julien brings perfect closure to a collection of thought-provoking stories.