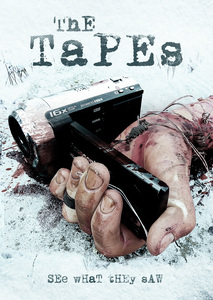 Shot on a meagre budget of £10,000, The Tapes (2011) is the debut feature from director Lee Alliston and Scott Bates and stars Mark Miller, Alliston and Mandy Lee Berger. Following the well-trodden found footage path, this intrinsically British take is a surprisingly accomplished attempt at injecting some much needed vigour into a now flailing genre. Numerous video tapes (containing footage of the most horrific nature) are discovered by police back in 2008. They star Gemma Baker (Natasha Sparks), a fame-hungry but talentless and ignorant girl, desperate to achieve her fifteen minutes of fame by appearing on Big Brother.

Gemma succeeded in roping in her equally dim-witted boyfriend Danny (Jason Maza) and his tech-savy best friend Nathan (Arnold Oceng) to make a show reel for her application. Whilst taking refuge inside a small town pub after filming in the freezing cold, they’re told by a barmaid about a swinger’s party which occurs weekly at a local farm. Danny spies an opportunity to make some cash by filming this seedy gathering, burning the footage onto DVDs to sell in local pubs. However, the three soon discover after snooping around this isolated farm that the participants of this get together aren’t ‘swinging’, but are instead up to something far more sinister. 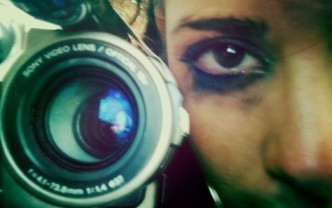 The Tapes adheres to many of the rules we’ve become accustomed to from the found footage style. There’s the classic casting of unlikeable and under-developed characters, the compulsory close-up of someone crying into the camera etc. However, The Tapes does insert some deft and interesting touches in an attempt to make you feel like you’re watching something that at least tries to be a little different. The candid documentary interviews with the police and family members of the film’s victims boasts a striking similarity to the recent spate of exploitative ‘true story’ shows that currently flood Channel 4. The Tapes is far from perfect, and numerous problems congregate to illuminate the amateur foundations of the film.

From the overbearing volume of the non-diegetic sound to the sloppy editing, there are countless obstacles to overcome before you can truly suspend your disbelief and become ensnared in this tale of rural horror. The most glaring impediment has to be the loud and brash way these skulking protagonists behave whilst staking out the apparent ‘sexy party’. The cast shout and clatter their way around the collection of derelict farmhouses with such carelessness it soon begins to irritate, far surpassing nervous tension and becoming downright annoying. As a short, sharp dose of nerve tingling excitement, The Tapes works a treat. It was always going to be incredibly unoriginal and riddled with clichés, but thankfully it delivers just enough scares to make it a worthwhile experienced for hardened fans of the genre.