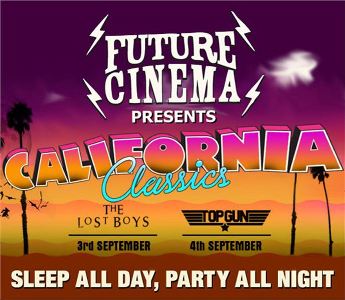 Tony Scott’s action classic Top Gun (1986) – starring Tom Cruise, Kelly McGillis and Val Kilmer – was the centre piece for the second day of Future Cinema’s California Classics double-bill last Sunday (Joel Schumacher’s The Lost Boys (1987) screened on the Saturday). With the announcement of the venue kept secret until the very last minute, it was a surprise to find out that the California-themed event would be held amidst the towering skyline of Canary Wharf.

In the exuberant fashion now recognisable as the hallmark of Future Cinema’s Secret Cinema strand, all of the stops were pulled out to create a truly immersive experience for the audience. Live DJs, 79 tonnes of sand, beach sports, Californian-themed food and drinks, lively dancers and audience members adorning USAF jumpsuits gave the event an atmosphere of real vibrancy, as it truly absorbed its audience into the world of Scott’s 80s camp classic. 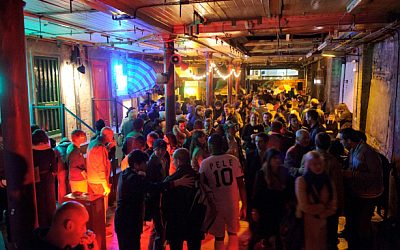 Founder of Future Cinema, Fabien Rigall, has previously expressed that he feels cinema “has become too formulaic” and that it should be more of an “event and social experience” – to that end Future Cinema’s numerous projects truly live up to these ideals and are clearly proving a huge success with their audiences.

This latest choice of film was a true master-stroke, as Scott’s Top Gun is a thematic buddy-action movie full to the brim with adrenaline-pumping visuals, an immensely powerful soundtrack and iconic, quintessentially 80s one-liners. As with The Lost Boys on the previous day, Top Gun was always destined to be a success with an audience on this scale, and received a resoundingly positive response from all in attendance.

During the screening of the film itself, attendees were encouraged to make this an interactive, and duly obliged by quoting their favourite lines and singing along to some of its hugely popular soundtrack, with the highlight being a giant sing-a-long to The Righteous Brothers’ You’ve Lost that Lovin’ Feelin’. It really was an experience that benefited from audience participation, helping to breathe new life to a 25 year old movie (whilst also taking our breath away…do you see what I did there).

Future Cinema events are never solely about the film as a stand-alone entity, but are all about audience engagement, blurring the lines between the real and cinematic worlds. With some of the most famous scenes from Top Gun being played out across the venue by actors, whilst scores of attendees wandered around in full USAF get-up, the two worlds collided in a way to create a real air of excitement at the potential of innovative film exhibition.